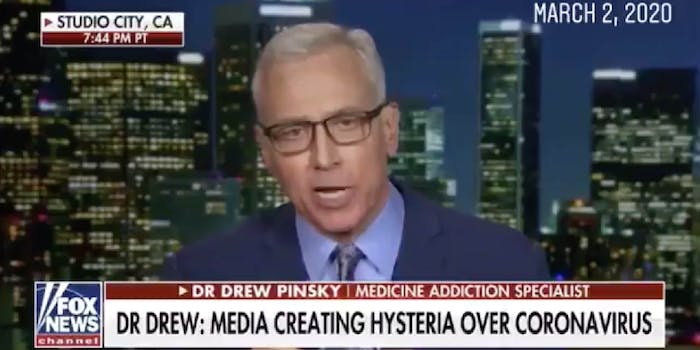 Dr. Drew really doesn’t want you to see this video compilation of him comparing coronavirus to flu

He has since apologized but is now trying to get the video scrubbed from the internet.

Dr. Drew Pinsky apologized after a video compilation of him downplaying the severity of the coronavirus went viral. Now, he is trying to get the video scrubbed from the internet.

“My early comments about equating with influenza were wrong. They were incorrect. I was part of a chorus that was saying that and we were wrong and I want to apologize for that. I wish I got it right but I got it wrong,” he said in a Periscope video, which was shared to his Twitter account, on Saturday.

In the video compilation in question, Pinksy tells the majority of the public not to worry and blames the media for stoking panic. He claims—in several clips—the flu is much more dangerous than COVID-19 and that your chances of being hit by an asteroid are “much higher” than your chances of dying from the coronavirus.

The coronavirus has so far killed over 8,500 people in the U.S., and by very conservative estimates, it’s expected to kill at least 100,000 Americans. According to the Centers for Disease Control and Prevention (CDC), the flu has killed 23,000 people in the U.S. and infected an estimated 38 million others this season. Unlike the flu, there is currently no proven vaccine or treatments for COVID-19 due to how new it is. Experts also believe the death rates differ. The death rate for seasonal flu in the U.S. is about 0.1%, while the death rate for COVID-19, though unknown, is believed to be higher than that of the flu.

After issuing his apology, Pinksy warned users who retweeted or quote-tweeted the video that “infringing copywrite (sic) laws is a crime.”

“Hang onto your retweets. Or erase to be safe,” he wrote.

Journalist Yashar Ali, who posted the compilation to Twitter and an even longer compilation to YouTube, claims the video was removed from YouTube after Pinksy likely submitted a copyright complaint.

“What are you trying to hide?” Ali asked Pinksy.