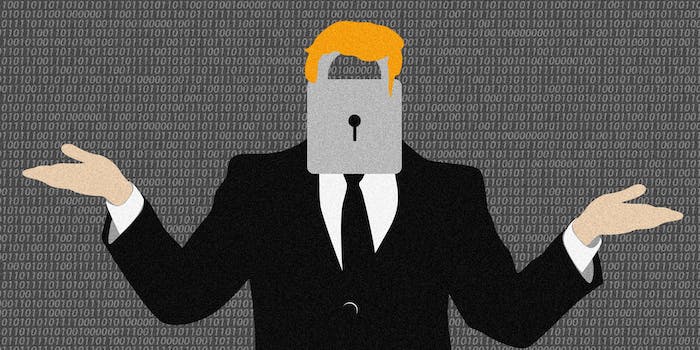 Digital privacy advocates and civil liberty groups are preparing for the worst.

The president-elect ran his campaign on a “law and order” platform, calling for government surveillance of mosques and activist groups like Black Lives Matter  (which the FBI and the Department of Homeland Security have already been doing) and a ban of Apple after the company refused to help unlock the San Bernardino, California, mass shooter’s iPhone.

Digital privacy advocates and civil liberty groups are preparing for the worst under a Trump administration. Trump will arrive at the White House at a time when mass surveillance and hacking by the U.S. government is more expansive and unchecked then ever. The FBI under the Trump administration will be able to hack into the computers of hundreds of thousands of innocent Americans with a single warrant, due to the amendments to Rule 41 that went into effect Dec. 1.

Efforts to reign in Section 702 of the Foreign Intelligence Surveillance Act, which permits warrantless surveillance of U.S. citizens abroad, faced a major blow in December. A federal appeals court ruled the government did not violate the constitutional rights of Mohamed Mohamud, a Somali-American student arrested by the FBI in 2010, when it spied on him using Section 702’s authorities.

Pushback from the private sector against mass surveillance—such as in the case of Apple—is far from guaranteed. Reuters reported in October that Yahoo built custom software on the request of the CIA and NSA to scan customer emails. The American Civil Liberties Union discovered in October that Geofeedia, a CIA-funded social media monitoring tool, was used by local law enforcement to monitor Blacks Lives Matter supporters and other activists and protesters of color.

Trump’s proposed pick to head the CIA, Rep. Mike Pompeo (R-Kan.), not only wants to revive but also expand the NSA’s Patriot Act bulk-data collection that Congress put to a halt in the aftermath of the NSA documents leaked by former contractor Edward Snowden. Trump’s proposed national security adviser, retired Lt. General Mike Flynn, served a top intelligence officer in the post-9/11 Bush administration and thinks the current intelligence apparatus under Obama is weak and bureaucratic. Flynn also insisted he was pushed from his role as head of the Defense Intelligence Agency due to his views on radical Islam.

Sen. Jeff Sessions (R-Ala.)—Trump’s nominee to head the Department of Justice as attorney general—is a staunch advocate of the Patriot Act-era of domestic surveillance, including roving wiretaps, searches of business records, and surveillance of suspected “lone wolf terrorists” not linked to terrorist groups. He also pushed back against attempts by Congress to reel back the NSA after the Snowden revelations.

“Sessions has made it clear that he is incredibly hostile to Silicon Valley, the internet in general, and the First and Fourth Amendments,” the Electronic Frontier Foundation’s Nate Cardozo told the Daily Dot in a phone interview. “He will be a big-government, anti-liberty attorney general.”

An examination of tweets prior to his run for office show that Trump’s criticism of the NSA’s spying powers over the years only seems to be directed at its exercise under President Barack Obama.

There are so many blatant lies coming out of the ADMINISTRATION – healthcare, spying, NSA, IRS, brutally killed Americans -WILL IT EVER END?

While Trump appears keenly aware of the NSA’s spying powers, he never once suggests they are out of line. Following the infamous botched website launch of healthcare.gov, Trump tweeted the following suggestion:

Why doesn't President Obama call upon the NSA to fix the badly broken website-then they could spy on all of the many cheaters & arrest them!

He also referred to the NSA monitoring the phone calls of world leaders, while making a birther jab:

Isn't it amazing that the U.S. and NSA can listen to the highly protected phone conversations of world leaders but can't get O's records!

Trump is also no fan of NSA whistleblower Edward Snowden.

"@DuncanHughes62: @realDonaldTrump the real Q is how does the NSA justify using contractors whom have access to such sensitive data? So true

To a random Twitter user who defended Snowden amidst claims the Booz Allen contractor was a traitor, Trump’s one-word rebuttal was simple: “Bullshit”.

"@fam5rock: @realDonaldTrump #snowden not a traitor. Shared info with fellow Americans who have a right to know about NSA snooping" Bullshit

China and Russia were unresponsive to requests by the Obama administration to help track down Snowden during the summer of 2013, an issue that Trump followed with some interest.

A coincidence that the NSA leaker is living openly in Hong Kong?! At the same time the Chinese Pres. met with Obama in CA.

Depending on how you interpret them, Trump’s behavior in respect to privacy and encryption are either incredibly cynical or incredibly naïve. The president-elect made phone calls to multiple world leaders in November without a government-secured telephone line and regularly picks up cold calls from world leaders on his personal cellphone.

Critics say that the NSA under the Obama administration has already taken massive liberties under Section 702 and estimate the number of Americans under surveillance to be in the millions. The programs under Section 702 that emerged in light of the Snowden leaks include PRISM, which allows the NSA to access messages you send abroad over virtually every major messaging product on the market.

Both Republicans and Democrats in Congress have made it clear that safeguarding the privacy and civil liberties of Americans is secondary to avoiding another terrorist attack on American soil. A bipartisan bill by Sens. Dianne Feinstein (D-Calif.) and Sen. Richard Burr (R-N.C.) released in April would require companies that offer encrypted messaging to un-encrypt the messages if met with a court order. That, of course, would defeat the entire point of end-to-end encryption messaging.

“This basically outlaws end-to-end encryption,” Joseph Lorenzo Hall, chief technologist at the Center for Democracy and Technology, told Wired. “It’s effectively the most anti-crypto bill of all anti-crypto bills.”

While the Burr-Feinstein bill didn’t make much headway in 2016, it’s headed for a comeback in the Trump administration’s first year. According to Bloomberg, Burr and his fellow Republicans in the Senate Intelligence Committee are expected to re-introduce a bill requiring companies to give investigators access to encrypted communications.

An NSA leaked memo in 2013 suggested that even possessing an encrypted app like WhatsApp or Signal (the downloads of which skyrocketed by 400 percent following Trump’s victory) makes you suspicious. The NSA is allowed to retain encrypted data until they find a way to “de-encrypt” them, according to TechDirt.

Such knowledge doesn’t bode well for the future of digital privacy. But Democrats in Congress who refused to stand in the way of the NSA under the reigns of a Democratic president may feel differently about Trump.   Cardozo, who serves as a senior staff attorney on EFF’s digital civil liberties team, is hopeful.

“The Democrats have a new reason to distrust the executive,” Cardozo said, “which they didn’t have on November 8th.”