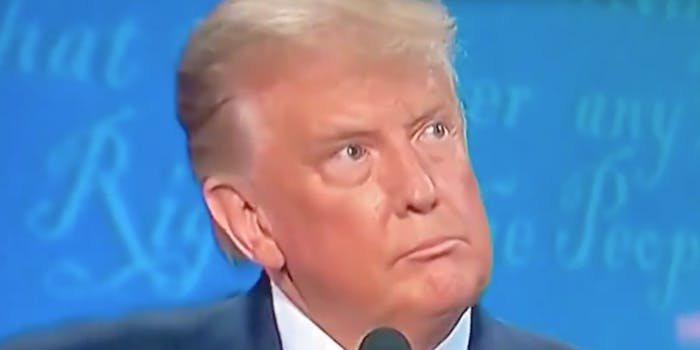 The internet can’t seem to get enough of a clip from Thursday evening’s presidential debate in which President Donald Trump becomes wide-eyed at the mention of “cocaine.”

The moment came amid a discussion on drug laws when Democratic presidential nominee Joe Biden mentioned his efforts as vice president to change sentencing times for cocaine possession.

One tweet highlighting Trump’s reaction to the drug has since been shared more 33,000 times.

“Wow. You say ‘cocaine’ around the Trumps and their eyes literally light up,” @kenolin1 said.

“Find someone who looks at you the way Trump looks when cocaine is mentioned,” @JSapp_AR added.

The footage also made the rounds on Reddit, garnering reactions on the platform’s highly-popular r/PublicFreakout subreddit.

Redditors speculated whether Trump’s reaction was due to a secret cocaine habit.

“Wondering if Trump was zoned out, only heard ‘cocaine’ and went into ‘Oh shit, is he talking about my cocaine use!?’ mode,” u/colorcorrection remarked.

The moment is far from the first time that Trump, or a member of his family, has gone viral for theories surrounding energy-inducing drugs.

The internet has long speculated that Trump may have an Adderall habit after the president famously spent much of a debate in 2016 sniffing.

Many were also convinced in September that they caught a piece of Adderall coming out of Trump’s nose during a press conference, although no actual evidence exists to prove such a claim.

Even Donald Trump Jr. was accused of having “cocaine eyes” during this year’s Republican National Convention (RNC).