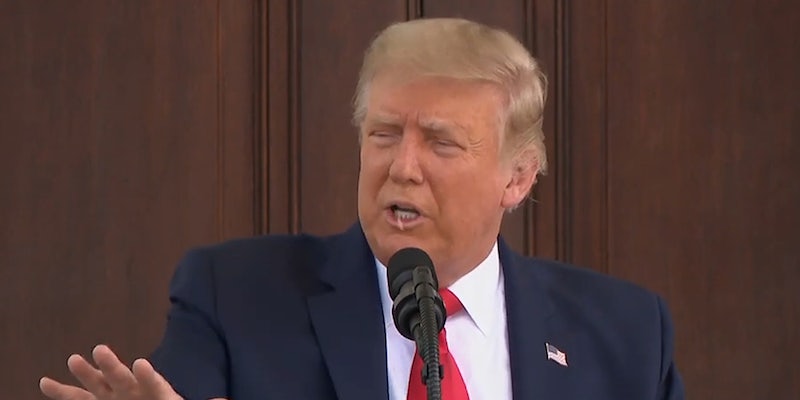 Did Adderall fly out of Trump’s nose at a press conference?

It's a Zapruder film for amphetamines.

Ever since he delivered a sniff-heavy performance in a debate with Hillary Clinton during the 2016 election—which has continued in numerous speeches and conferences throughout his presidency—people have speculated about the behaviors that precipitate President Donald Trump’s sniffing.

Is it an intense breathing exercise used to calm nerves and keep focus during intense moments, as some right-wing mindset gurus have claimed? Or is it an addiction to ephedrine-laced Sudafed? What about cocaine?

Others have frequently—and without any sort of evidence—claimed Trump has snorted Adderall, the stimulant used to treat children with ADHD.

And thanks to a press conference yesterday at the White House, the Adderall truthers believe they’ve found their smoking gun—the flecks of a snorted pill.

“Drugs just shot out of Trump’s nose, live, on national TV,” wrote user Fred Harding in a viral tweet that was favorited more than 13,000 times.

But while it’s not unprecedented for a president to pop pills, what proof did they have? Videos from his presser that, well, could be the Zapruder film for our age.

Here’s one where something small and white flies across the screen like a dart.

Another shot shows an even heftier chunk of …. something, going across the screen. (Which is at 32:06 of this video, if you are interested in breaking it down frame-by-frame.)

Others fell back on the cocaine theory, noting that this might be the first time we’ve seen presidential coke boogers on live TV.

Whatever it is, the internet truly wants to believe the family is frequently abusing some sort of substance. Because this isn’t the first time a Trump has faced widespread speculation of stimulant use this summer. Last month, after Donald Trump Jr.’s Republican National Convention speech, “cocaine eyes” trended on Twitter.