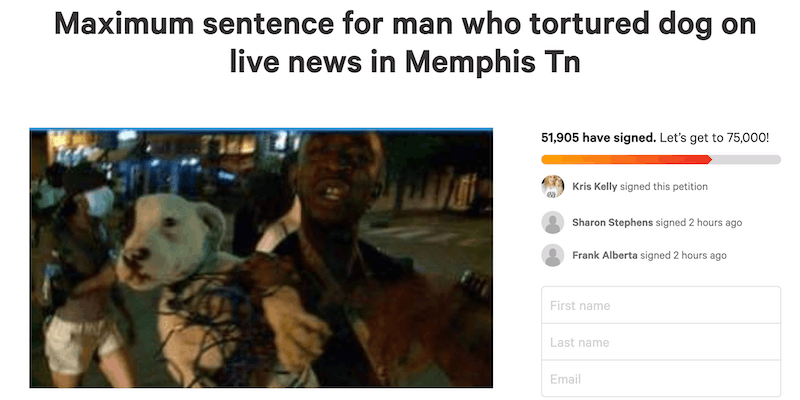 There is currently no evidence to support viral claim.

More than 50,000 people have signed a Change.org petition responding to a viral—but entirely unverified—story that a protester stole, tortured, and killed a rescue dog in Tennessee.

The claim traces back to a live report Local 24 News in Memphis, which was interrupted by protesters jumping into the shot. One man could be seen picking up a dog by the scruff of its neck, jostling it around as its legs flailed before the news station cut the feed.

Soon after, photos and a second video were widely circulated on social media, showing other angles to the interaction, including additional shots of the dog being handled in a manner many have called abusive. It’s been viewed more 550,000 times in a tweet from user @litepimp.

Ian Miles Cheong, a right-wing figure who has circulated misinformation relating to the protests, also tweeted the video, adding without any evidence that the dog was stolen “from a rescue yard” and was later “found strangled to death.”

He then posted screenshots from individual Facebook pages offering monetary rewards for information on the man in the video—or as he put it, a “bounty out on the killer.”

Numerous conservative commentators have flagged the story as evidence of violence and lawlessness from protesters rallying over the police killing of George Floyd.

The story has also been making the rounds on numerous animal rescue pages on Facebook and Instagram, many linking back to the The Kris Kelly Foundation, a California-based animal rescue organization. In multiple posts in the Foundation’s public Facebook group, Kris Kelly claims:

“1. He was stolen out of a rescues yard. 2. News sent video to police. 3. Memphis Animal Services has been notified. 4. He was returned to the rescue dead on the fence. 5. He has been identified. 6. The rescue is very afraid of retaliation.”

Kelly is also pushing the popular Change.org petition, which repeats the allegations that the dog was later killed by the man in the video.

The Kris Kelly Foundation did not immediately respond to the Daily Dot’s request for comment to back up these allegations.

While the videos and photos are certainly troubling, there has been no official confirmation of any part of the backstory prescribed to the incident.

“We too were concerned about the way the dog was handled in the video, but we have received no information about who the man in the photos/videos is,” Katie Pemberton, a Community Engagement Specialist with Memphis Animal Services, told the Daily Dot.

“As far as the puppy dying or having been killed, all we have seen are unsubstantiated claims on social media, generally from people outside of the area, none of whom can trace the information back to the source. No one has been able to share the source of that information or present any concrete evidence to indicate the puppy is deceased. No one has made any reports to us (and we are animal control, the agency charged with investigating animal cruelty in Memphis) that a puppy or dog matching this description was found deceased. We have received no concrete information that the puppy was stolen from a rescue or returned dead on the fence. We have very strong partnerships with rescue groups in our area, and I speculate that if this happened to any local rescue group, they would have reported it to us.”

Pemberton says the agency is investigating this case and urges anyone with information to email [email protected].