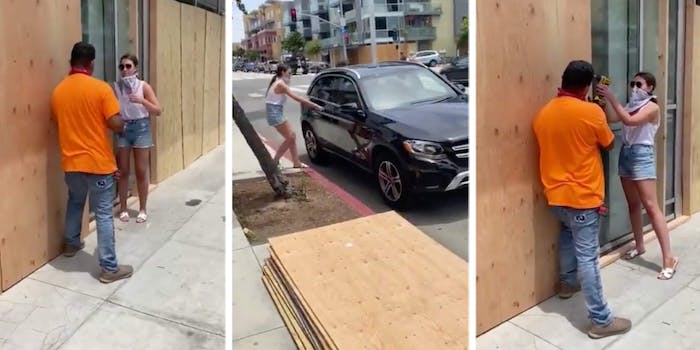 Influencers, please don't do this.

In what’s already been quite a week for performative posting in response to the protests for George Floyd, a video of a journalist pretending to help board up a Los Angeles business has gone viral.

The recording shows a young woman holding a drill up, clearly indicating she is helping put up protection for a glass-front building in preparation for protests. She’s standing completely still, posed next to a man in a bright orange shirt, as another man snaps a photo.

She then pulls down the bandana she had over her face, thanks the man in the orange shirt “so much” while handing him back the drill, and walks away, joking about “boyfriends of Instagram” as she gets into a Mercedes Benz with her “photographer.”

“Good job guys! BLM,” she says as she shuts the door behind her. In less than 20 seconds, she was out of there.

The staged photo-op quickly gained traction on Twitter, with New York Times reporter Taylor Lorenz identifying the woman in the video as Fionaa Moriarty-McLaughlin, a commentary intern with the Washington Examiner.

It’s since received millions of views after being shared by celebrities including Ava DuVernay and LeBron James.

Others more pointedly decried it as virtue signaling.

Moriarty-McLaughlin had made headlines just days before for a video she posted on Twitter of protesters spray painting an Ouai Haircare billboard in Los Angeles.

“BREAKING: As if vandalizing all the buildings in LA wasn’t enough @Blklivesmatter has taken to the billboards as a crowd of rioters roars in approval. #GeorgeFloyd #LARiots,” read the now-deleted tweet, according to Business Insider.

But the founder of the brand, Jen Atkin, responded in support of the graffiti.

Moriarty-McLaughlin has not publicly responded to the recording, but she has since turned her social media channels to private and deleted her Twitter account.

User @ewufortheloss, who originally posted the now-viral video, urged others not to dox or “brand someone for life” over the incident, but instead to use it as “something that helps us understand what’s right and what’s wrong.”

“Influencers: use your platform for ACTUAL good, not the PERCEPTION of good,” @ewufortheloss added.

Update 8:24am CT, June 3: The Washington Examiner has not responded to a request for comment from the Daily Dot, but it has deleted Moriarty-McLaughlin’s page from the site.