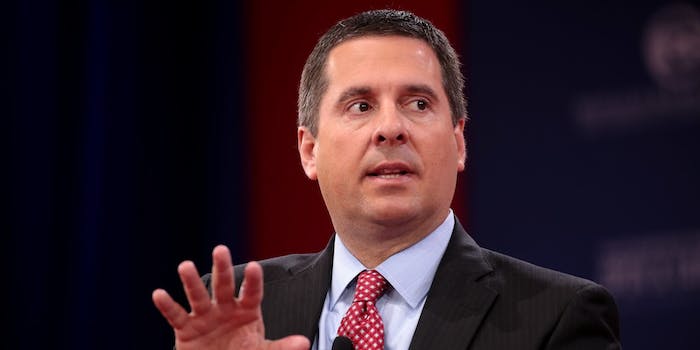 The conservative politician is involved in six lawsuits against those he claims defamed him.

A judge ruled last week that Rep. Devin Nunes (R-Ca.) could not sue Twitter over accounts that he claims defamed him.

Judge John Marshall stated on Friday that social media companies can not be held liable for the content users post.

Nunes had argued that Twitter was responsible for tweets made by two parody accounts, “Devin Nunes’ Cow” and “Devin Nunes’ Mom,” as well strategist Liz Mair.

The politician claimed that the three users had damaged his reputation and caused him to win his election in 2018 by a smaller margin that he would have otherwise. Nunes alleged that by refusing to remove certain content he deemed offensive, the social media platform had essentially endorsed the accounts’ remarks.

Twitter argued in response that federal law known as Section 230 clearly indicates that its company is not liable. Marshall agreed, stating that “the court refuses” to “treat Twitter as the publisher or speaker of the content provided by others based on its allowing or not allowing certain content to be on its internet platform.”

While Twitter has effectively been removed from Nunes’ crosshairs, the lawsuit will still continue against the three accounts in question. But there’s just one problem: Nunes doesn’t know the identities behind the two parody accounts, and Twitter has declined to give up the information.

As noted by the Fresno Bee, the lawsuit is just one of six that Nunes is currently involved in. The conservative is also looking to sue opposition research firm Fusion GPS and numerous news organizations he claims defamed him, including CNN, the Washington Post, Hearst, and McClatchy.