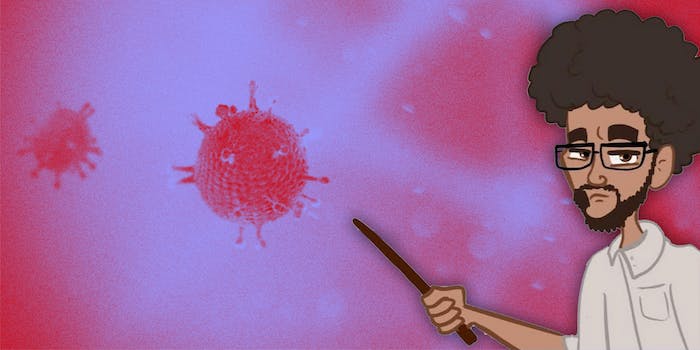 Last year, the disinformation was falsely attributed to a real scientist. Now it's credited to a fictitious one.

Like much COVID-19 disinformation, the post grabs your attention. But unless you’re primed to believe conspiracy theories about the deadly virus, most would find its claims dubious at best. Spend any time researching, and you’ll find numerous fact checks thoroughly debunking its claims, including one by the scientist who was falsely credited as the author.

The post first circulated late last year. Fewer than six months later, it’s back with a new sheen of believability in the form of a new author, who one YouTuber says doesn’t actually exist. It’s taking the right-wing disinformation and conspiracy theory realm by storm.

The author, source, or speaker, depending on which of the many versions you encounter, comes across as authoritative. “Dr. Derek Knauss” claims to be a clinical lab scientist with Ph.D.’s in virology and immunology. He says he’s personally confirmed that COVID-19 is “imaginary and fictitious.” He claims that he and his colleagues analyzed 1,500 samples from positive tests and didn’t find a single case of COVID-19—and neither did labs at Cornell University, Stanford University, and the University of California, with whom they supposedly shared samples. Instead, he says, they found the flu.

“Knauss” concludes by saying he believes COVID-19 was created by “China and the globalists … to establish a global tyranny and totalitarian control police state.”

His far-fetched claims are categorically false, of course. Last December, the post was thoroughly debunked by outlets ranging from local television stations to Snopes. Snopes traced it back to an anonymous comment on Istoria Ministries Blog. The anonymous user did not attribute the post to anyone, and noted that they’re not a professional, “merely a hillbilly,” Snopes added. When it crossed onto its platform, Facebook flagged the post as misinformation, PolitiFact reported at the time.

Back then, the post was attributed to Robert Oswald. Oswald, whose faculty biography was included in those early versions, is a real person who works at Cornell University, but he doesn’t have a doctorate in virology or immunology, he didn’t write the post, nor does he agree with its contents. He doesn’t even live in Southern California, as the post claims. In spite of its overwhelming and obvious falsities, Oswald received such frequent inquiries about the post that he added a section debunking it to his faculty bio.

Now it’s back with a vengeance. This time, it’s attributed to “Dr. Derek Knauss,” a man who seems to be entirely fictitious.

Verbatim versions of the exact same disinformation once attributed to Oswald are now credited to Knauss. It’s the fake news version of Superman’s Clark Kent disguise.

Whereas late last year it seems to have been confined to Facebook, this time it’s crossed platforms, where it’s multiplying and metamorphizing. In addition to its original form, sans any reference to Oswald, there are articles based on it across multiple websites. It’s also being regurgitated in social media posts on mainstream platforms and shadowy corners of the web alike. There’s even a video of “Dr. Knauss” reading the post nearly word-for-word.

The Daily Dot found versions of it on Twitter, Facebook, Parler, Telegram, and Google Groups. On each platform, people referenced it as fact.

It’s also been excerpted and used as a source for innumerable articles.

Last month, a YouTuber who debunks anti-vaccine pseudoscience put out a video about its claims.

On his channel, Debunk the Funk with Dr. Wilson, Wilson, who says he has a doctorate in molecular biology, meticulously went through the “facts” as claimed by the supposed Knauss and proved them false one-by-one.

“Well, that certainly was embarrassing for Dr. Knauss,” Wilson says at the conclusion of the five-minute video, which he published in early March. “These COVID deniers get easier and easier to debunk every single week.”

Wilson updated the video description after learning that the man in the video isn’t Derek Knauss at all.

“I’ve revised the title of this video to reflect the fact that the man in the video is not ‘Derek Knauss,’ nor is he a doctor of any kind,” Wilson wrote. “He is a man named Patrick Gunnels and was likely reading a bogus blog post that was falsely attributed to Dr. Rob Oswald.”

Gunnels is a right-wing YouTuber who has a channel called Reading Epic Threads, where, as the name indicates, he often reads aloud from stories and threads.

The video about COVID-19 being a hoax doesn’t appear to be on Reading Epic Threads or Gunnels’ other YouTube channel, which is under his name. His resemblance to “Dr. Derek Knauss” is unmistakable, however.

So how did the video of Gunnels, a Libertarian former candidate for Congress, get falsely attributed to the so-called Dr. Knauss? It’s not clear. (The Daily Dot was not able to obtain contact information for Gunnels.)

It appears that someone downloaded a copy of Gunnels’ video, added the name “Dr. Derek Knauss” to it, and posted it. From there, the previously debunked misinformation spread, gradually infecting the right-wing conspiracy theorist internet ecosystem, where it continues spreading to present day.