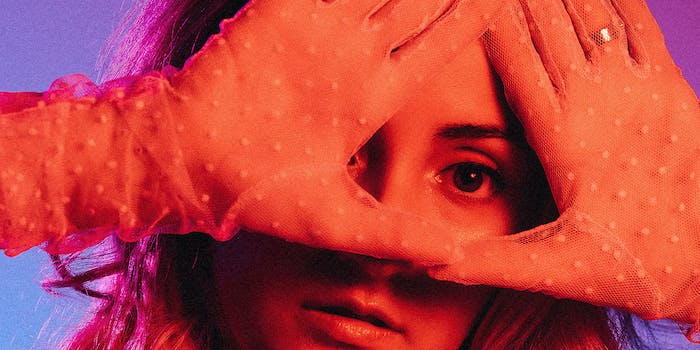 You can't say QAnon is based in fact online, even if it is.

Given that he was propelled into office by his fervent belief that Barack Obama wasn’t born in the United States, it’s not a surprise that Donald Trump’s entire presidency was beset by conspiracy theories.

But for every conspiracy theory pushed by Trump, there were conspiracy theories about him, as well. His rumored status as a Russian intelligence asset, his finances, his health, and even whether his wife was actually a body double were all hot topics of debate during his four years in office. Trump conspiracy theories are so rampant that they’ve even been lumped together under the term “BlueAnon”—hinting that any theory against Trump from the left is the equivalent of the conspiracy theories that support him from the right.

Overall, the cumulative effect of five years of conspiracy theories for and against Trump has made it harder than ever to actually discuss politics in a rational manner without invoking conspiracies immediately. Rather than employing rigorous skepticism, we are defaulting to conspiracy-driven explanations when none are required.

A perfect example of the instant all-or-nothing polarization of conspiracy theories is journalist Matt Taibbi’s quote regarding QAnon and its similarities with the frequent “BlueAnon” subject of Russian interference in the 2016 election.

“The underlying thought, that it’s a coalition of Trumpists who are taking on these elitists who want to take over the rest of society—there’s a core of emotional truth animating the QAnon conspiracy theory,” Taibbi said on his podcast in February. “But the Russia thing… doesn’t really have a correlation to anything that makes any sense.”

Taibbi is a longtime skeptic of the Trump/Russia nexus, as well as a vocal critic of its media coverage, going so far as to declare Special Counsel Robert Mueller’s lack of indictments for collusion “a death-blow for the reputation of the American news media.” So it would make sense that he would find more truth in QAnon than in the Russia scandal.

Immediately, liberals on Twitter (the quote seems to have made little impact outside social media) jumped on Taibbi for seemingly elevating the fake conspiracy theory QAnon over the real Russia scandal. But Taibbi (who didn’t respond to a request for comment from Daily Dot) has been a longtime critic not just of the hysteria over Russia, but of the way it’s been covered in the left-leaning media, who looked at it and Mueller’s investigation as a silver bullet to end the Trump presidency early. In particular, he’s criticized the lumping together of all Russians everywhere as a threat to American democracy, and the hyperbolic claims that Trump has been a Russian spy for 30 years, or that Russian meddling was the only thing that got him into office. These scandals ignore the fact that Trump’s populism and “say what the rest of us only think” attitude actually were appealing to millions of people— and still are. Trump still managed to get over 74 million votes (more than he got in 2016) with little interference from Russia in 2020.

And whether social media pundits like it, QAnon actually does have an emotional core of truth to it. Many conspiracy theories do. Big business and powerful politicians get away with things that most of us can’t get away with. QAnon gives the people who feel they’re being targeted or kept down by an all-powerful force a way to fight back. It gives people hope for a better future, even if that hope is utterly false and propelled by prophetic grifters. And it’s not like Taibbi has any love for QAnon itself—he deemed it “political quackery” in a 2018 Rolling Stone article. But he clearly understands that, irrespective of anything to do with Russia, there are reasons why people believe it and find comfort in its tenets.

And it’s OK to admit that. But you wouldn’t believe that by the response he received online.

QAnon was embraced by conservative Trump supporters even though those same people had won a crushing victory in 2016, controlling the White House and both houses of Congress. Just like 2016 saw the victors embracing conspiracy theories, the same thing is happening in 2020. In spite of what seemed like a crushing victory, many Biden supporters and progressives still saw Trump and his ethos at work in political and cultural events. And more than that, they still see his influence everywhere, in a sort of hangover from the frenetic fight of the last four years. And it brought on a fear that borders on the irrational.

One incident that exploded into liberal conspiracy theories with little thought was the controversy over the design of the stage at this year’s CPAC conference. As soon as the event began, several people spotted what they believed was a shape similar to a Norse symbol known as an Odal Rune—which was modified by Nazi Germany to serve as the logo of the SS Race and Settlement Office, as well as a lower-tier SS military unit.

Twitter immediately became full of self-proclaimed experts on Nazi symbology who declared that CPAC “definitely” designed the stage to invoke it. There was a much simpler and less conspiratorial explanation for why CPAC’s stage looked like that—but it did take a few days to come out.

As Jewish newspaper the Forward revealed, the stage had been developed as one of a number of designs offered CPAC by the D.C. firm Design Foundry —a business owned by a liberal family who had designed stages and events for parties by major corporations, as well as Nelson Mandela’s 100th birthday celebration and the Biden Cancer Summit in 2018. And it wasn’t as if CPAC’s speakers needed a secret symbol to espouse their commitment to the MAGA base. The entire event was full of culture war nonsense and hardcore conspiracy theories about the election being stolen.

The “rune controversy” was simply adding one more unnecessary element of conspiracy-mongering based on nothing more than the belief that the people who run CPAC are Nazis. And those who pointed out that sometimes a stage design is just a stage design, and that not everyone has an intimate knowledge of obscure SS symbology, was shouted down as naïve or a tacit supporter of CPAC.

And to be clear, this was an extremely obscure symbol used by one division of the SS stationed in what was then Yugoslavia, and one administrative branch of the SS. Even experts in extremism and neo-Nazi movements were divided on whether the resemblance between the Odal rune and the CPAC stage was intentional, and CPAC’s spokesman claimed the stage design was “centered around logistics,” needing to put distance between speakers to comply with COVID-19 rules.

Ultimately, the “Odal Rune” controversy became another in a seemingly endless series of comparisons between Trump and the GOP and Hitler and the Nazis, particularly in the aftermath of the Capitol insurrection, an event compared to the failed Nazi Beer Hall Putsch of 1923. It’s a comparison made so often it’s lost all meaning and obscures the misdeeds of both.

Trump’s fingerprints are even seen in the growing scandal over New York Governor Andrew Cuomo’s (D) behavior with women. Despite there being no evidence that there’s any conspiracy at work, nor any need for one, anti-Trump social media influencers believe they’ve found one. In the growing number of women coming out with new accusations against Cuomo, many high-profile social media figures see a plot by Trump’s forces to oust Cuomo so that whoever replaces him can pardon Trump for state-level crimes being investigated by the New York’s attorney general. Like so many other conspiracy theories driven by irrational fear of Trump, this one doesn’t hold up, for one simple reason: The lieutenant governor who would take power if Cuomo leaves office is also a Democrat.

And it’s a liberal mirror of the allegations that the women who accused Supreme Court nominee Brett Kavanaugh of misconduct were doing it for political reasons.

These and so many other left-leaning conspiracy theories have “emotional truth” to them, as Matt Taibbi said of QAnon. They are spread by people genuinely afraid of what Trump is capable of, and shell-shocked by four years of him essentially getting away with anything he wanted to. But also like QAnon, they fall apart under even a moderate amount of scrutiny.

And while liberals might call people who believe in QAnon deluded, if they examined their own conspiratorial beliefs, they might be shocked to see the same thing.