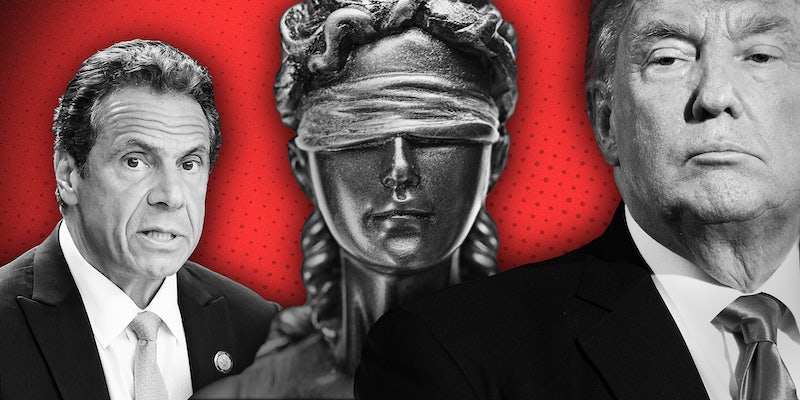 There is no evidence that this comes from Roger Stone.

When the first allegations of sexual harassment came against New York Gov. Andrew Cuomo (D), some people chose to ignore the stories and focus on their provenance, which they deemed dubious without any evidence.

One name in particular cropped up a couple times online.

“Is Roger Stone involved? It reeks of him,” wrote one user. Others chimed in similarly.

Why Stone, a far-right ally of President Donald Trump, would coordinate a campaign against Cuomo in March 2021 wasn’t a question that made a lot of sense, let alone had a coherent answer.

But resistance liberals have stumbled onto a convoluted, incoherent solution to write off the governor of New York’s burgeoning sexual harassment scandal (to say nothing of Cuomo’s other festering scandal over nursing home deaths in the state).

According to the theory, Stone is working with Trump to get Cuomo out of office so that a Republican can take over the governor’s office… so that this new governor can pardon Trump for investigations by the state’s attorney general.

The Supreme Court recently allowed New York to access Trump’s taxes as part of an investigation into the former president’s businesses, dealings, shady accounting, and various other misdeeds.

In 2021, partisans are often oblivious to the misdeeds within their own party, so rather than this being a reckoning for Cuomo for a number of sins, it has to be something nefarious, an explanation that also exonerates him.

But if Cuomo resigns, his Lieutenant Gov. Kathy Hochul would take over. She is also a long-time Democrat and would not be likely to pardon Trump.

So there’s no amount of far-right back scenes plotting here that would even make sense, no matter what yarn people want to spin on Twitter.