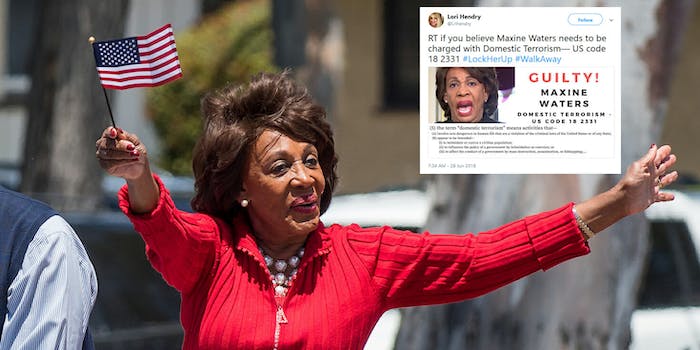 Some say Waters is 'inciting violence.'

Waters made the remarks after White House Press Secretary Sarah Huckabee Sanders was asked to leave a restaurant in Virginia and protesters shouted “shame” at Homeland Security Secretary Kirstjen Nielson while she ate in a Mexican restaurant in Washington D.C.

Since then, calls for Waters to be arrested, or charged with inciting violence, have grown louder.

Conservative television host Laura Ingraham called for an arrest early this week, according to Newsweek.

“Waters is inciting violence, that woman should be brought up on charges of incitement of violence,” Ingraham said on her podcast, according to the news outlet. “These people actually want people killed. Maxine Waters wants there to be blood on the streets, that woman is a complete outrage and if anyone gets hurt it’s on her hands, the blood is on her hands.”

Similarly, Antonio Sabato Jr., a congressional candidate in California, called Waters a “hustler of hate” during an appearance on CNN.

Sabato Jr. said she was “attacking the administration” and “should be put behind bars and throw away the key.”

The calls for an arrest have also grown online.

The charge stems from a video Loomer took trying to ask Waters questions.

In the video, posted on the hyper-conservative blog Big League Politics, Waters calls Loomer “darling,” and asks her to set up a time to talk with her office rather than doing an interview while walking down a hallway. The lawmaker repeats this request several times.

At one point in the video the California lawmaker puts a paper in front of her face trying to block Loomer’s camera.

The conservative personality claimed on Twitter that Waters “hit my hand, then she swatted me in the face twice w/ her papers.”

While far-right personalities have called for Waters arrest, the trickle-down effect has also come onto Twitter.

Maxine Waters should be arrested for inciting violence on the Trump Administration.

RT if you believe Maxine Waters needs to be charged with Domestic Terrorism— US code 18 2331 #LockHerUp #WalkAway pic.twitter.com/qu4d8Lc0ol

So why is that Maxine Waters can get away with inciting riots and violence, but Trump apparently can't get any credit for the things he's accomplished?? So, violence, yes? Does this mean that those who follow Water's orders won't be arrested? She should be jailed for this.