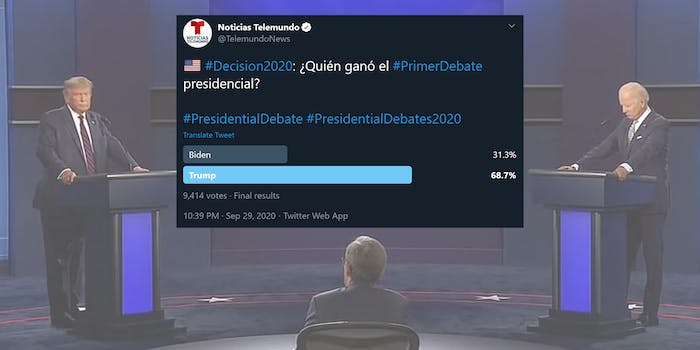 Polling is essential to determine which political candidate Americans feel won a debate.

After Tuesday’s nightmare presidential debate, the first of three, pollsters rushed to gauge how the public reacted to the performances of President Donald Trump and Democratic presidential nominee Joe Biden, which is no easy task. Creating accurate polls is an exacting science that requires carefully crafting questions so as not to influence the outcome, selecting a representative and randomized audience, and certifying results.

It might not be accurate or representative, it might be impossible to know who voted, but on the bright side, it can be ready in mere minutes. It’s sort of like cooking a steak in the microwave.

After the debate, Telemundo News did a Twitter poll asking in Spanish whether people thought Trump or Biden won.

This is fairly common practice among media outlets.

However, it isn’t common for other news organizations to rely on the poll like was conducted by FiveThirtyEight or Pew Research Center. But that’s just what happened.

After a majority voted that Trump won the debate in the extremely unscientific poll, right-leaning media jumped on it. Headline after headline boasted about a Telemundo poll finding that a majority of Spanish-speakers thought Trump won. Some claimed, without evidence, that those polled were Americans (Twitter is available worldwide) or Telemundo viewers, which is impossible to know. It’s also impossible to know if those who responded to the poll spoke Spanish, as translation is available on Twitter and doesn’t exactly take fluency in Spanish to know that a tweet that includes #PresidentialDebate and has the candidates’ names as the options is asking who won the debate.

That didn’t stop White House Press Secretary Kayleigh McEnany from touting the poll, as did other Trump supporters. Fox News host Sean Hannity even read its results live on air last night as if was a reliable measure of who Latinx voters thought won the debate.

Newsweek also used the poll as if it was legitimate.

People were stunned; not by the results, by the fact that anyone would claim the poll was legitimate. It certainly should’ve been a red flag that Trump trails Biden by 42 points among Latinx voters nationwide, according to a Univision poll released on Monday.

“I hope @Newsweek gets dragged for filth & laziness,” tweeted @Jerri_Lynn25. “This is irresponsible ‘journalism’ to say the least.”

Unlike some of its contemporaries, when Telemundo referenced the poll in its own broadcast, it stressed that it wasn’t scientific.