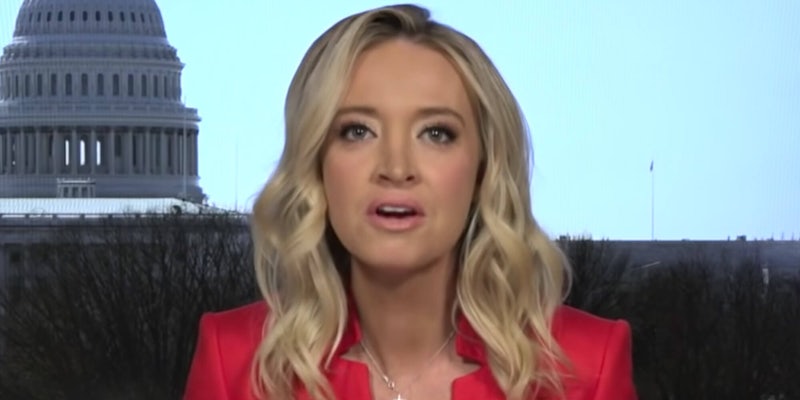 Kayleigh McEnany has a curious double standard when it comes to Trump and Obama.

Old tweets from Kayleigh McEnany, the new press secretary for President Donald Trump, are pissing people off online once again.

A 2012 tweet from McEnany in which she referred to then-President Barack Obama merely as “Obama” is making the rounds after she condemned a reporter on Monday for referring to Trump without using “president” first.

People were quick to spot the contradiction.

Many also pointed to McEnany’s use of the word “son” when referring to the former president, arguing that the word contained clear racial connotations.

“Why not just say ‘boy’ like you really want to?” a commenter added.

The apparent double standard from the press secretary quickly led others to note questionable remarks from McEnany’s past.

In 2016, for example, McEnany defended the president after he argued that the judge overseeing his fraud trial regarding Trump University should recuse himself because of his Mexican heritage.

But this isn’t even the first time the press secretary’s tweets have been called into question as of late.

McEnany in 2012 made disparaging remarks about Obama’s brother as well by referencing a “hut in Kenya.”

“How I Met Your Brother — Never mind, forgot he’s still in that hut in Kenya,” she tweeted.

McEnany also inaccurately predicted in February that Americans “will not see diseases like the coronavirus come here” while Trump is leading the country.

“And isn’t that refreshing when contrasting it with the awful presidency of President Obama?” she added.”

It seems likely that similarly controversial remarks will be made in the future given that McEnany has declined to condemn her previous statements.