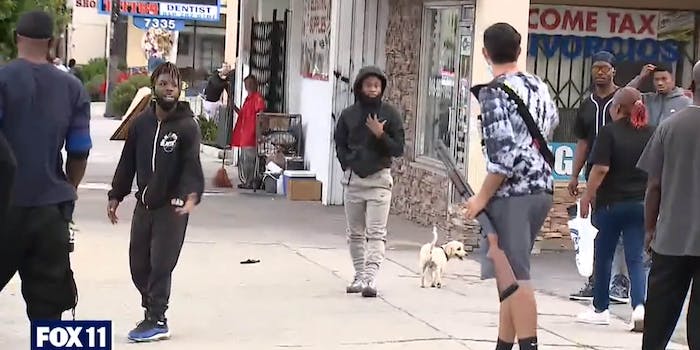 Cops hold a corner store owner at gunpoint despite protests from reporters and pedestrians.

Police on Monday tried to break up an attempted looting in Van Nuys, California—and wound up holding local business owners at gunpoint instead, video shows.

The video, filmed by Fox 11 Los Angeles, shows the owner of a corner liquor store and several of his associates fending off attempted looters, who wanted to break into the neighboring gold store. The owners try to flag the police from the sidewalk as they drive by the scene.

Police eventually make their way to the standoff between the owners and the looters. But instead of deescalating the situation, one cop points a gun at the liquor store owner. Another cop slams a woman against a wall and handcuffs her for trying to protect the store owner. This happens despite protests from reporters and pedestrians that they’ve got the wrong group.

“No, no, they’re fine! They’re good!” reporter Christina Gonzalez shouts as she tries to wave the cops in the direction of the looters, who fled the scene.

“Stand down for a sec, please,” an officer tells Gonzalez.

The Van Nuys showdown is just one of a myriad of examples from the past several days of cops mismanaging and escalating otherwise peaceful protests across the United States.

Thousands of people have gathered to protest the death of George Floyd, the 46-year-old unarmed Black man who died at the hands of Minneapolis police officer Derek Chauvin on Monday, May 25.

“This is some of the systemic issues that maybe some of those protesters were upset about,” another Fox 11 reporter says as police detain the Van Nuys business owners.

Gonzalez later caught up with the woman whom the cops threw against the wall. She said she had known the business owners for decades, and was there with her husband and brother-in-law to help protect them against attempted looters.

“I understand the protest. I understand what this is about. I get it. I understand that. I’m fighting for the same protest,” she says. “But what we not gonna do, we don’t want other people from different cities to come and tear where we live at. ‘Cause we have to rebuild this. We did this once before.”

The woman also criticizes Chauvin, who has been charged with third-degree murder, and the other three officers who stood idly as Chauvin knelt on Floyd’s neck for eight minutes.

“Now you got three other police officers you need to go get,” the woman says. “Until you go get them, it’s just gonna be unruly.”