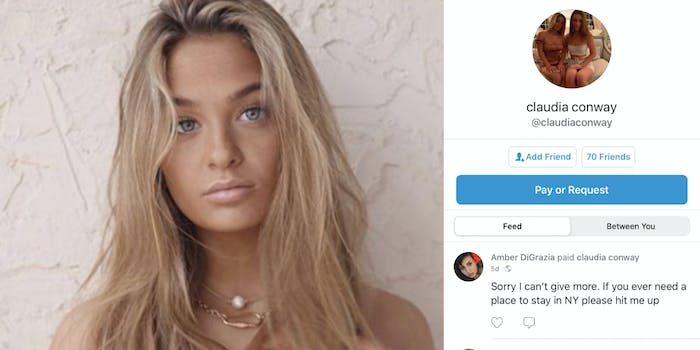 Claudia Conway’s supporters are sending her money via Venmo

'GET THAT EMANCIPATION QUEEN.'

It’s been about a week since Claudia Conway announced she was “officially pushing for emancipation” from her parents, soon-to-be ex-White House adviser Kellyanne Conway and Lincoln Project co-founder George Conway.

After Conway found out her mother would be speaking at the Republican National Convention (RNC), which she said “devastated” her, the 15-year-old announced she would be seeking emancipation. She had previously only mentioned it in passing (TikTok comments) and alluded to it on Twitter when she publicly sought a pro bono lawyer to represent her.

Conway has been in a public dispute with both her parents after it was discovered she’s a Trump-hating leftist on TikTok, where she has become a star by amassing a following of nearly 750,000. Conway has railed against her mother for serving in the Trump administration. “My mother’s job ruined my life to begin with. heartbreaking that she continues to go down that path after years of watching her children suffer. selfish. it’s all about money and fame, ladies and gentlemen,” she tweeted in a follow-up to her emancipation announcement.

She has also slammed her father for being too conservative despite him being a notable Trump critic. “We agree on absolutely nothing,” she has previously said.

She has also accused both of emotional and physical abuse.

After her mother announced she would be leaving the White House, and her father the Lincoln Project, Conway said she is continuing to pursue emancipation.

Now, supporters of the teen are sending money to her Venmo account, which she has plugged in her TikTok bio. “GET THAT EMANCIPATION QUEEN,” one contributor wrote, with another saying the money was “for the ‘we gonna get u outta there’ fund.”

Others sent her money as a reward “for having (her) mom step down” and following her mom’s RNC speech, which the Trump counselor controversially followed through with after announcing her plans to depart the White House. “For your mom’s heinous speech. Put this toward your emancipation,” one wrote to go along with their contribution.

Some are simply stanning the TikToker. “Be my gf (girl btw) also hope u gtfo of there,” one wrote.

Conway was on a social media hiatus following her parents’ announcements up until Tuesday when she made her return to the platform. “In honor of musical.ly day today, im back,” she wrote in a TikTok video. To mark her return, she also created a video mocking a Trump supporter who asked her for $1 million “for making me watch all your dumb TikTok’s.”