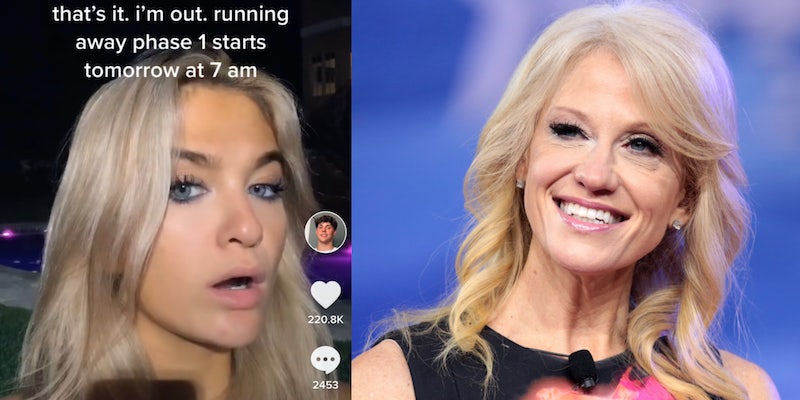 'My mother’s job ruined my life.'

Update 10:29pm CT, Aug. 23: Kellyanne Conway announced in a statement on Sunday night that she will be leaving the White House at the end of August. The announcement comes shortly after her daughter, Claudia Conway, said she was “officially pushing for emancipation” on Twitter. George Conway also revealed that he is stepping away from the Lincoln Project to “devote more time to family matters.” It is unclear if Kellyanne Conway will still be speaking at the RNC.

“I’m officially pushing for emancipation. Buckle up because this is probably going to be public one way or another, unfortunately. Welcome to my life,” the 15-year-old tweeted Saturday night.

The tweet comes after it was announced her mother would be speaking at the upcoming Republican National Convention (RNC), a move that she said “devastated” her “beyond compare.” She also reacted to the news on TikTok, saying she was going to initiate “phase 1” of “running away.”

“My mother’s job ruined my life to begin with. heartbreaking that she continues to go down that path after years of watching her children suffer. selfish. it’s all about money and fame, ladies and gentlemen,” she tweeted in a follow-up.

Conway has previously both alluded to and outright said in her TikTok comments that she is trying to get emancipated. Following her alleged arrest—which she claims her mother was responsible for—she tweeted that she was seeking a pro bono lawyer. She also said she was “safe for now and staying with a friend in a different state” in her comments section on TikTok around that same time.

Conway has been embroiled in a very public feud with both of her parents after it was discovered in June that she was a Trump-hating leftist on TikTok, where she has amassed more than 600,000 followers. She has bashed her mother for working under the Trump administration and her father for being too conservative.

“As for my dad, politically, we agree on absolutely nothing. We just both happen to have common sense when it comes to our current president. Stop ‘stanning’ him,” Conway tweeted on Saturday of her father, who is co-founder of the Lincoln Project, a Republican anti-Trump group.

Conway ended her string of tweets by noting that she’s “aware” she’s “a savage.”