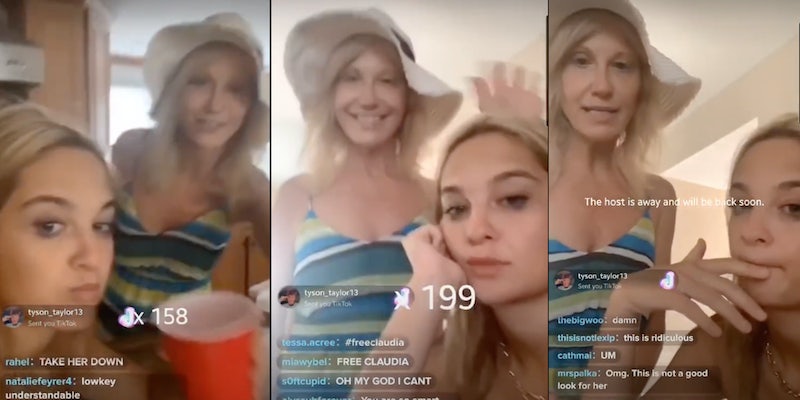 'She keeps insulting my mental health,' Claudia, who claims her parents are trying to silence her, says at one point in the stream.

Kellyanne Conway, an adviser to President Donald Trump, and her daughter, Claudia, were caught on TikTok Live sparring over the teenager’s cellphone.

The fight doesn’t appear hostile. On the evening of July 3, Claudia Conway, 15, was on TikTok Live when her mother entered the frame.

“You can get back to it. Turn it off now,” Kellyanne Conway says. She says “hi” to the audience watching.

“No, I’m not OK. Thanks guys, though,” Claudia Conways says, reportedly responding to comments on her video asking if she has any other family to live with and if she’s safe.

“Also, she keeps insulting my mental health,” Claudia Conways continues. “I’m just showing everyone the truth. Like, you’re literally not letting me use my freedom of speech.”

In response, Kellyanne Conway says “dad”—George Conway III—wants his daughter to “shut it down because not everyone following you is well-meaning.”

A few hours before the video went live, George Conway III, tweeted, “To journalists: @kellyannepolls and I do *not* consent to any communications between you and any of our minor children, including our daughter Claudia. So desist. Thank you.”

After his tweet, an account allegedly belonging to Claudia Conway responded, saying, “(He’s) just mad that I’m finally getting my voice heard.” She ends the message with a blow to her parents: “Sorry your marriage failed.”

In recent days, Claudia Conway has become a TikTok star. The teen often touts causes such as the Black Lives Matter movement. Her TikTok bio reads, “ARREST BREONNA’S MURDERERS,” a nod to Breonna Taylor, who was gunned down by police during a botched raid of her home.

During the spat with her mom, Kellyanne Conway waves to her daughter’s followers, saying, “Hi there. This many people have nothing to do? That is amazing. It’s so nice out.”

This leaves Claudia Conway’s mouth agape. Kellyanne Conway yells “mine!” during an ensuing struggle for the phone.

George Conway III is a well-known critic of Trump. Previously, Trump called George Conway III a “stone cold LOSER & husband from hell!” According to the New York Times, the couple is unhappy over the husband’s constant barbs toward the president.