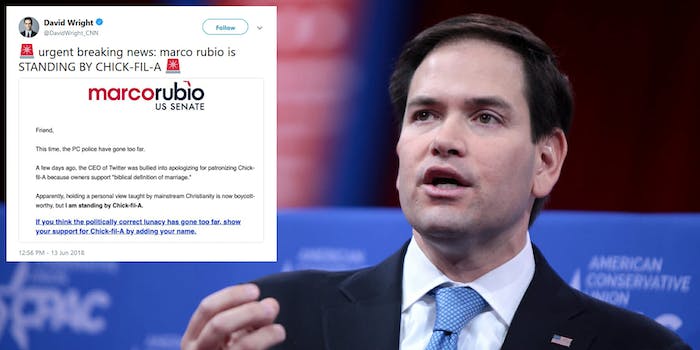 He thinks Twitter's CEO shouldn't have apologized for supporting the company.

Sen. Marco Rubio (R-Fla.) is using a recent snafu surrounding Twitter CEO Jack Dorsey and Chick-fil-A to pander to his conservative followers and call out the “PC police.”

Dorsey, also the founder of money transfer service Square, apologized earlier this week for telling his followers to “boost” Chick-fil-A during Pride Month. The CEO of the fast food company has notorious anti-gay marriage views, and the company has donated to anti-gay rights groups.

After social media backlash, Dorsey responded to a tweet from former CNN host Soledad O’Brien, who called his “boost” tweet “interesting” given the significance of the month to the LGBTQ community.

Apparently, this apology was too much for Rubio, who sent out a campaign email asking for people to sign their names and “show your support” for the franchise, according to CNN.

“This time, the PC police have gone too far,” the email reads. “A few days ago the CEO of Twitter was bullied into apologizing for patronizing Chick-fil-A because owners support ‘biblical definition of marriage.’ Apparently holding a personal view taught by mainstream Christianity is now boycott-worthy, but I am standing by Chick-fil-A.”

Considering he is not up for re-election this year, it’s odd for Rubio to send out campaign-style emails like the one reportedly sent about Chick-fil-A.

At least he isn’t trying to get someone a job at the fast food company, like some members of President Donald Trump’s administration.