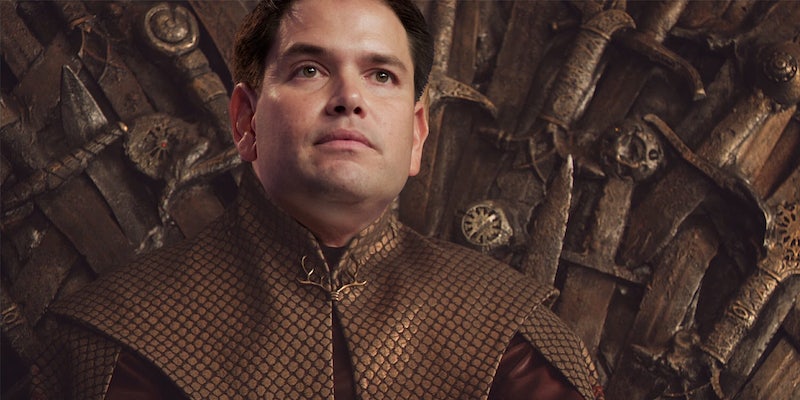 Screengrab via Game of Thrones/HBO Jamelle Bouie/Flickr (CC BY 2.0) Remix by Jason Reed

'It's got a lot of good strategies.'

More than a year after Donald Trump lambasted him in the Republican presidential primary, Sen. Marco Rubio (R-Fla.) says he’s finally learned the reason why he didn’t win the election: He didn’t watch Game of Thrones.

“If I’d have watched [Game of Thrones] two years ago, I would’ve been president,” Rubio said, via the Independent Journal Review. “It’s got a lot of good strategies.”

Clearly, Rubio was joking. But he also might be making a decent point.

If he had taken on the male persona of Daenerys Targaryen, who doesn’t mind burning alive a political enemy, perhaps he would have a had a shot at winning the Oval Office. Instead, he made a reference to Trump having a small penis in a debate, got saddled with the Trump nickname “Little Marco,” and got destroyed in the primary of his home state of Florida before dropping out of the race.

Turns out Rubio was more like Jon Arryn, killed off early in the show’s timeline.

And just in case it wasn’t clear that Rubio was fooling around.