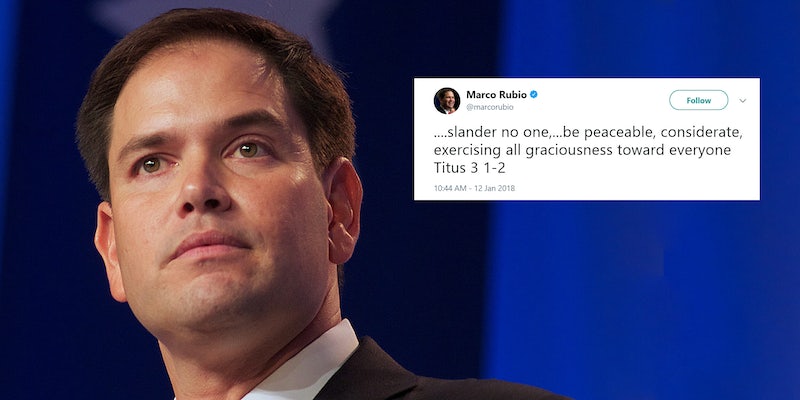 Rubio mailed it in here—and people didn't like it.

In the wake of President Donald Trump‘s reported “shithole” comments, members of Congress have spoken out vociferously against him. But Sen. Marco Rubio (R-Fla.), who Trump has taken pleasure in belittling, offered this timid response.

….slander no one,…be peaceable, considerate, exercising all graciousness toward everyone Titus 3 1-2

Earlier, Rubio sent out a string of tweets about the accomplishments of Haitians, who Trump reportedly said lived in a “shithole” country.

#HaitianAmericans have made great contribution in the field of science and technology https://t.co/zRazSzGq5T

#HaitianAmericans are serving in public office as members of both political parties. https://t.co/pdEn0rtwRC

People who were also unbelievably shocked that was the strongest denouncement Rubio could muster.

Respectfully sir this is a cowards way out. Anyone not directly condemning DJTs recent display of racism/xenophobia for exactly what it is becomes complicit in normalizing it.
Senator, you & the GOP leadership should be gathered on Capitol steps demanding change

This is the face of Republican cowardice. This is the best he can do. https://t.co/48SBbQt1Vv

Man, I haven’t seen a better example of Republican cowardice than this. Hiding behind scripture to keep from speaking truth to evil is wrong, Senator. Where is the love for children when it comes to funding CHIP? Couldn’t find a passage to protect them, but you can for a bigot? https://t.co/20kJfrNaSG

Another profile in spinelessness. https://t.co/hQPKuj14S7

That Rubio refuses to name the president in his tweets stands in stark contrast to Trump himself, who seemed to take joy in publicly insulting Rubio throughout the primary.

Little Marco Rubio, the lightweight no show Senator from Florida is just another Washington politician. pic.twitter.com/NsLrHrqjdx

Trump later changed his derogatory nickname for Rubio from “Little” to L-I-D-D-L-E. Rubio, for his part, has mostly praised the administration on Twitter.