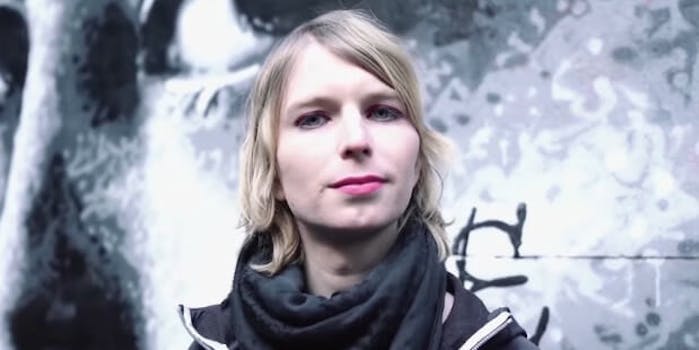 'I would rather starve to death than to change my opinion in this regard.'

Chelsea Manning was imprisoned for civil contempt on Thursday evening for the second time this year, after once again refusing to cooperate with a grand jury thought to be investigating WikiLeaks founder Julian Assange.

The whistleblower, who leaked 750,000 classified military files to WikiLeaks, had vowed in interviews and a Twitch live stream through the past week that she would not testify to the grand jury and protested the secrecy of proceedings.

On Thursday, in court, the extent of Manning’s resolve on the issue was clear.

“I would rather starve to death than to change my opinion in this regard,” she told District Judge Anthony Trenga. “And when I say that, I mean that quite literally.”

Trenga then sentenced Manning to indefinite imprisonment, until she either submits to testify or the grand jury expires.

In an additional unprecedented move to put increasing pressure on Manning, the district judge coercively ruled that after 30 days the whistleblower will be fined $500 for every day behind bars. The fine will then increase to $1,000 per day in jail after 60 days.

The heavy-handed punishment betrays the growing frustration of federal prosecutors, for who this is a second attempt at making Manning testify.

In March, Manning fought against an identical subpoena from a different grand jury. The judge on that occasion also sentenced her to jail time, which lasted 62 days until that grand jury investigation expired and she was freed.

Before even leaving jail last week, however, Manning was served with a fresh subpoena requiring she appear before the current grand jury and over which she is now imprisoned.

Although Manning has been given no idea what the grand jury investigation is about, her legal team believe it’s in relation to her former interactions with Assange in 2010. The enormous cache she leaked included the infamous 2007 “Collateral Murder” video showing a U.S. attack helicopter killing two Reuters journalists in Iraq.

Manning’s 2013 conviction resulted in a 35-year sentence that was commuted after seven years by former President Barack Obama.

“We are of course disappointed with the outcome of today’s hearing,” Manning’s attorney Moira Meltzer-Cohen said in a statement. “I anticipate it will be exactly as coercive as the previous sanction—which is to say not at all.

“In 2010 Chelsea made a principled decision to let the world see the true nature modern asymmetric warfare,” Meltzer-Cohen continued. “It is telling that the United States has always been more concerned with the disclosure of those documents than with the damning substance of the disclosures.”