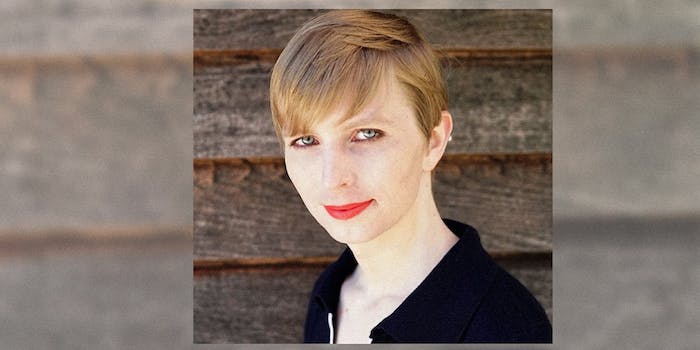 The whistleblower is still trying to save the world.

Almost a year after she was released from prison, Chelsea Manning is still trying to settle into the outside world. But she’s not resting.

The transgender activist and former whistleblower spoke about the adjustment to her life and the political environment during a talk with Vogue’s creative digital director Sally Singer at SXSW on Tuesday.

Manning, 30, also called for a code of ethics for tech developers, explaining that during her time in Iraq, she saw her algorithms, ostensibly meant to do good, used in “nefarious” ways. She was recycling things she had learned to build code for marketing purposes to write algorithms used in wartime.

“Every piece of software can be misused,” Manning said. “It’s about trying to buffer, to make it harder to be misused.”

She likened coders to doctors, saying individuals ought to maintain a set of ethics that supersede orders from administrators and institutions.

“We as technologists and developers, especially those of us that work on systems that affect millions of people… We need to be aware of the consequences of what we’re making,” Manning said.

Manning, a former Army intelligence analyst who sent military and diplomatic documents to WikiLeaks, was released from prison in May 2017 after former President Barack Obama commuted her 35-year sentence.

She said when she got out, she saw predictive policing as a “feedback loop” where neighborhoods that were already heavily policed due to racism and biases were even more targeted after biased data was entered into algorithms.

“Police are viewing entire neighborhoods as criminals, the enemy of sorts,” Manning said. “This mentality, the tools that are used, algorithms that I worked on in Iraq have found their way in policing.”

And that’s just one thing that has changed about the world since she got out of prison.

“Now that I’m out here, we really have the militarization of police, the styles of policing, the rhetoric of politics,” she said. “Everything’s changed. It’s become so much darker and scarier.”

She’s not, however, surprised to have reentered a world where President Donald Trump has been elected—and where abuse of Facebook algorithms influenced the election’s outcome.

“The political rhetoric and style of governance that we’ve been seeing is not an aberration,” she said. “It’s a conclusion of the systems we’ve built.”

In her daily life, Manning is finally over the hurdle of the arduous processes that accompany even the simplest tasks after life in prison, like obtaining a driver’s license—but she said there’s a sense of both loneliness and political obligation that follows her even now. Manning announced earlier this year that she’s running for the U.S. Senate as a Democrat.

“The problem is I don’t feel safe. I don’t feel this sense of security and safety in my own apartment. I feel embattled,” Manning said. “With this hostile political environment, I feel a responsibility to be a part of that. I don’t have anywhere to hide.”

The same can be said of her social media presence, which is simultaneously an optimistic platform of activism and something to shield herself from since most of her posts receive death threats and transphobic remarks.