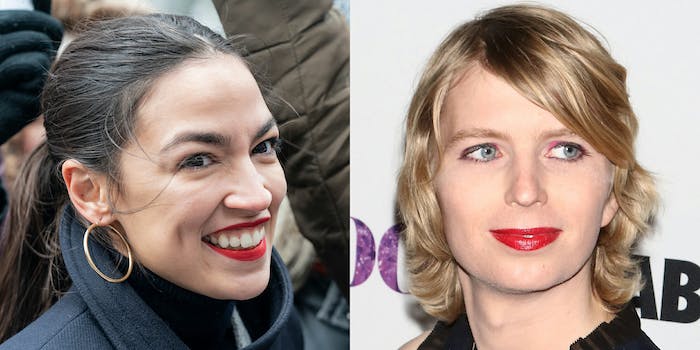 AOC's appearance is important, but it shouldn't overshadow trans folks.

Last weekend, Alexandria Ocasio-Cortez dropped into a Twitch fundraising marathon led by Harry “Hbomberguy” Brewis for Mermaids U.K., a trans youth organization under attack by the IT Crowd creator Graham Linehan. But as with all things Ocasio-Cortez, the media seemed to hyper-focus on her every move and not zoom out to the bigger picture. Case in point, a video clip from NowThis simultaneously fixates on AOC’s cameo while calling Chelsea Manning an “unidentified caller.”

The clip, which is over three minutes long, calls the trans rights fundraiser a “gaming livestream” and says AOC came on to “talk about trans rights, legislation, and her favorite games.” While Ocasio-Cortez credits Manning with getting her on the stream during the fundraiser, Manning’s appearance is never disclosed in NowThis’ video. The clip also proceeds to call Twitter user (and self-identified “internet sloth”) Casey Explosion and YouTuber Dan Olson each an “unidentified caller,” even though the two played a significant role in orchestrating the stream behind the scenes.

In response to not being identified, Manning told the Daily Dot that NowThis “just posts slick videos in a hurry hoping they go viral in a shotgun approach.” When asked if she felt insulted or erased by the video, she sent an emoji: “😆.”

“I think it’s pretty hard to insult me—even harder to erase me,” Manning continued. “I mean I get enough press as it is.”

Manning told the Daily Dot that she prefers to “take a back seat to let other voices speak” and “signal boost and amplify.” However, she notes that the NowThis video ignores the trans people seen on the stream and the work done by the stream.

“95 percent of organizing is just behind the scenes work by lots of organizers,” Manning said. “The clip kinda glosses over the trans voices we had on and the incredible trans gamer community we’re building.”

Explosion also told the Daily Dot that she “didn’t particularly care that I wasn’t credited” and that she even changed her display name to “[Unidentified Caller]” to have fun after the video’s appearance. But she believes Manning wasn’t identified out of laziness.

“Weird? No,” she told the Daily Dot over Twitter DM. “Lazy? Probably.”

Olson, on the other hand, said it was “professionally insulting” that he wasn’t identified in the video and that it still “stings,” although he has “gotten more than enough credit elsewhere.”

“The comedic thing, however, really is the ‘[unidentified caller]’ thing because it shows that they really, really just didn’t care,” Olson told the Daily Dot. “Everyone involved is still extremely active in wrapping things up, and even a quick visit to [Hbomberguy’s] Twitter quickly gets you a list of the mod team. It would have taken mere minutes to find someone who could identify all three ‘unidentified’ participants, so the fact that they didn’t, means they didn’t even try.”

On Twitter, Hbomberguy was quick to point out NowThis’ blunder on his timeline.

“I’d like to thank [unidentified caller] for their incredible work,” he quipped on Twitter. Others followed Explosion, Olson, and Hbomberguy’s lead. (The Daily Dot also reached out to Hbomberguy for comment and is awaiting his responses.)

I'd like to thank [unidentified caller] for their incredible work

any amount of searching would have identified casey as [Unidentified Caller] but gotta get those AOC clicks asap i guess https://t.co/1NTmn0y9WW

Yeah it's nice that you reported on this but uh, I'm pretty sure those "Unidentified Caller"s were important enough to identify because they ran the fucking stream. https://t.co/5DKALl1T3G

it's pretty gross that on a video about a trans charity you've reduced the two trans people talking to [unidentified caller]. what year is your digital strategy in? 1999?

When reached for comment about not identifying three of the organizers, NowThis directed the Daily Dot to an official comment it made on its Facebook post at 3:31pm CT on Wednesday. The Facebook comment identifies Manning as the first “unidentified caller” in the video, but it does not identify Explosion or Olson. (The comment was posted just eight minutes before NowThis responded to Daily Dot’s request for comment, which was sent earlier this morning.)

While NowThis is receiving the brunt of the criticism on Twitter, it reflects a much bigger problem surrounding the media’s response to Hbomberguy’s trans rights stream. For trans viewers and participants, the stream was an affirming and joyous occasion where cis and trans folks came together to help trans children. But American reporters avoided that angle.

When asked about this issue by the Daily Dot, Explosion suggested U.S. reporters are mostly focused on Ocasio-Cortez’s appearance largely because U.S. media is framing the stream around her for an American audience.

“BBC, for example, had Mermaids (the charity we were raising money for) CEO Susie Green on and spoke to her, and gaming outlets focused more on Harris and the Donkey Kong stream itself,” Explosion said. “I think each outlet is framing it to what their niche is, so I expect more political outlets from the U.S. frame it in reference to the very influential U.S. politician.”

On the other hand, Olson believes there is “a lot of valid discussions to be had” about Ocasio-Cortez’s drop in, but he also says he’s “not surprised, just disappointed” with the media’s intense fixation on her appearance during the stream.

“A lot of the coverage, particularly American coverage, has focused on AOC’s visit, so by Tuesday, another story doing the same was just par for the course,” Olson told the Daily Dot. “Heck, we’d already had a couple of headlines that basically framed it like she had been the instigator of the entire charity event.”

Ocasio-Cortez’s appearance on a trans rights Twitch stream is newsworthy in its own right. In fact, this reporter covered its significance this morning. And for the record, Explosion isn’t necessarily upset with the media coverage; in fact, while she calls it “overwhelming,” she says it’s overall “been incredible.”

Manning also stressed that the stream was primarily built on “raising money and building a community,” and that the trans community doesn’t depend on the press alone to successfully fulfill its goals.

“The trans community is organizing autonomously on an international scale in the face of powerful threats—we don’t depend on press attention to accomplish our organizing goals,” Manning told the Daily Dot. “The wonderful thing about having Alex on the stream was that she inspired tens of thousands of trans people who aren’t often heard—she emphasized the need for autonomous community activism in the stream as well.”

Nuance is important, though, and there’s a difference between analyzing Ocasio-Cortez’s role on the stream and focusing so heavily on her presence that media coverage erases the trans people managing and running it. Relegating Manning and Explosion to the name “unidentified caller” suggests their identities as trans folks aren’t important compared to a cis politician’s appearance. In reality, Ocasio-Cortez never would have appeared without Manning and Explosion. Reporters should remember the trans folks spearheading trans activism, lest they resign one of the most important trans figures of the 2010s to the phrase “unidentified caller.”

Editor’s note: Updated to include comments from Manning and NowThis at 4:12pm CT.