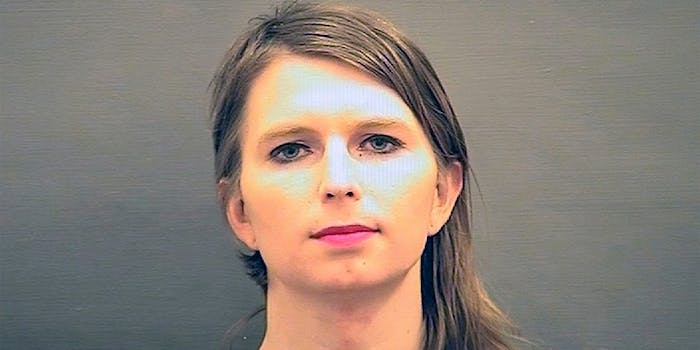 Manning spent the past two years building a community, only to be forced into isolation again.

I remember the first photo I saw of Chelsea Manning when she was released from prison. It wasn’t her iconic May 18, 2017 selfie labeled “Okay, so here I am everyone!! =P” It was a post from the day before, showing Manning wearing a new pair of Chucks on a light-wood floor. The caption read, “First steps of freedom.”

The moment I saw that photo, I sent it to my girlfriend. It’s a running joke that trans women wear Converse low-tops; I walked around in them all the time when I first transitioned. I knew Manning— who came out as transgender during the seven years she spent in prison for whistleblowing—would fit right in with the trans community. But I didn’t realize just how much.

Three months later, while hanging out with one of my trans friends in Manhattan, I learned she had met Manning in-person through a mutual friend. This became a common theme: Manning would hang out at a friend’s event. A bunch of trans girls would go out for drinks and she would tag along. A friend group would get together for a museum date with Manning and make a day out of it. Chelsea Manning wasn’t just a public figure to her trans friends, she was a person you watched the Super Bowl with, talked about memes with, or swapped ideas about political theory with. She was one of us.

So when news broke out in early March that Manning was jailed for refusing to testify in front of a grand jury on WikiLeaks and had been placed into solitary confinement, that news hit home hard. No reporter in the world can capture what it feels like to know someone in your community is being tortured.

I don’t like to place people on pedestals. But there’s something about Manning that is humbling. The public values she espouses aren’t a mask, a front, or a glorified vision of what she would like to be. What you see in public isn’t very different from who she is in private. And what you see in private is a woman who is—or rather, was—finally getting to be part of her very own trans community.

In late July 2017, shortly after her release, Manning showed up at a picnic for trans women in Brooklyn. A friend of mine, Tyler Beebe, ended up joining a bunch of other trans women in a circle in Prospect Park, “shooting the shit” with Manning.

“I think she had fun,” Beebe told me over Signal, “but she seemed a little overwhelmed/paranoid, which with what she has gone through, I don’t blame her.”

Given the traumatizing experiences she went through in prison, it’s no surprise. Yet she’s become known for her approachability. One anonymous trans nonbinary person in the Brooklyn community told me they met Manning during 2017’s Lambda Literary Awards, and said she came across as “genuine and down to earth” with everyone, VIPs and non-VIPs alike. The following summer, an anonymous trans woman I spoke to met Manning at June 2018’s Trans Day of Action in Manhattan. That trans woman told me that Manning seemed at ease, “being chill and organic” while talking with others.

Out in the free world, Manning seemed eager to access the community she never had before. Briana Silberberg, New York City Anti-Violence Project’s community organizer, first hung out with Manning in fall 2017 through a trans femme group chat. Manning would come up to New York from Maryland now and then, and the friend group would hang out with her when she was in town. Silberberg described her as “wickedly funny” and fun to be around, with plenty of interesting stories to share.

“She was the one other person while we were watching the Super Bowl who actually cared about what was happening during the game,” Silberberg told me as I laughed. “A room full of trans femmes, we might as well put on a fucking movie and we’ll be just as entertained.”

That isn’t to say Manning is just hanging out with friends and doesn’t understand her status. She uses her public platform to help others, as she really cares deeply about doing things “that are really serious and difficult and have pretty extreme consequences,” said Silberberg. She “wants the world to be a better place.”

“She’s just been a helpful person for me, finding cool resources for constructive modes of political thought about how to imagine better things,” Silberberg said. “And as she’s shown time and again, she’s a person who doing that isn’t just some performance. It’s something that she takes really seriously.”

good morning to everyone except Judge Claude Hilton and the staff of William Truesdale Detention Center, who have now been holding @xychelsea in “administrative segregation” (read: solitary) for 19 days https://t.co/uQmpQ7SFa4

If you’ve spent enough time in any major city’s trans community, then you’ll know there aren’t many degrees of separation between its members and its most well-known figures. That’s not to say trans spaces don’t have their fair share of problems (just read Porpentine’s “Hot Allostatic Load”). But issues aside, there’s comradery in spending your time with other trans people. In a world that disparages trans people and makes them feel lesser, nothing can compare to the shared experiences and struggles the trans community shares with one another. As journalist Janus Rose puts it, Manning “lives for other trans people.”

Rose, a privacy educator who works with the “Chelsea Resists” committee to support Manning while she is in jail, considers Manning a close friend. Before Manning’s sentence was commuted in 2017, Rose wrote letters to her while she was in prison. That June, the two met in person through a mutual friend. They immediately clicked over their firm dedication to their boundaries, virtues, and values, which Rose admired in Manning. She really was “the person she presents herself to be.”

“It was kind of interesting to see that all of her actions since getting out of prison were consistent with the motivations that she had for doing the [WikiLeaks] leak,” Rose told me over a Signal call. “It all sort of tied together in this way that I felt was really consistent and [was] indicative of a highly principled person. And that’s a quality that I admire in people.”

Since her release in 2017, “the ability to be around other trans people I think is really valuable to her,” Rose said. “Like, it’s pretty obvious why. For the longest time, she was the only female-identifying trans person in an all-male facility. That’s really isolating. I think she treasures the opportunity to meet other trans people.”

That Manning is now in solitary confinement is devastating: She has been through so much, and she was finally getting the therapy and the real-life friendships she needed to recover. But the government took that all away from her. Make no mistake: Solitary confinement is torture. It causes a wide range of symptoms on those exposed, from hallucinations to panic attacks to memory issues to paranoia. It also deeply affects a person’s ability to navigate the world and how they relate to others once they’re out. Manning isn’t immune to that. While she has friends that are ready to help her, support her, and look out for her when she’s spiraling, recovery is a long process. It will take a lifetime.

“The thing with her is that she has a lot of trauma. And it’s really, really difficult for her to be a person in the world sometimes,” Rose explained to me. “And that’s really hard. And it’s hard for her, and it’s also hard for the people around her that are close to her to have a relationship with a person who has experienced that much trauma.”

When we talk about Manning and her treatment while incarcerated, we focus a lot on what it represents. It’s a symbol of state violence. It’s a message about the way incarceration relies on torture and violence. It has a chilling effect on leakers, whistleblowers, and left-wing activists. All of these things are true, and they shouldn’t be forgotten.

But we should always remember what solitary confinement is ultimately about: traumatizing people for perceived wrongdoing. Many of those placed into solitary are marginalized, and not just in terms of gender identity. The Marshall Project reveals Black inmates, in particular, make up a larger percentage of solitary confinement occupants in many states compared to white prisoners.

Chelsea Manning has spent 16 days in solitary confinement — 22 hours each day alone in a cell. The psychological impacts of that kind of prolonged isolation cannot be overstated, as Chelsea already knows all too well. Statement from her support committee: https://t.co/YsfvDMXev3 pic.twitter.com/vAWv7c0KtR

I’ve only talked to Manning briefly over Twitter DM as a reporter. I don’t know Chelsea personally. But Silberberg watched the Super Bowl with Manning, and Rose helped her during her darkest post-release moments, and while talking to them, I wasn’t just a journalist, and Chelsea Manning wasn’t just a political prisoner. I was a trans woman talking to other trans women about someone close to them in excruciating pain. This was someone they cared about, the same way I care about my friends in the community. To see the state take Manning away from them and to torture her like this, there are simply no words.

“Here was this person who I consider my friend, who went through all this horrible shit, and now they’re just once again dragging her back in,” Rose told me. “That’s the thing that really makes me mad. It’s just that they can’t just accept this testimony that she gave for hours and hours years ago, and just accept that […] it’s really kind of predatory.”

And yet, Silberberg feels humbled by Manning’s decision to refuse to testify.

“That she knew that [she would be jailed], and that she was willing to do that, I think is just one of the most incredible testaments to the person that she’s chosen to be,” Silberberg said.

Manning inspires us, and in some ways, we inspire her. So when you’re finally free, Chelsea, I hope you stop by Brooklyn again. I know a lot of people who’d love to hang out and have hotdogs and shoot the shit.