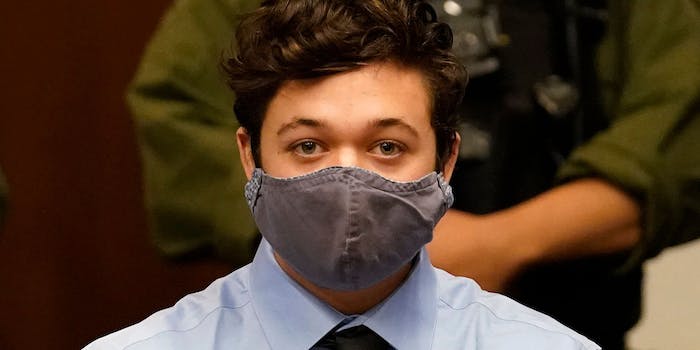 ‘Great weapon retention and calmness’: Cops heap praise on Kyle Rittenhouse while donating to his defense

Retired and active-duty police officers heaped praise on Kyle Rittenhouse as they donated to his defense fund, leaked documents provided to the Daily Dot reveal.

Rittenhouse was charged in August in the shooting of three protesters in Kenosha, Wisconsin, two who died, during protests in response to the police shooting of Jacob Blake.

On GiveSendGo, an alternative that became popular in the wake of bans on GoFundMe, several fundraisers were held for Rittenhouse, who was praised online via right-wingers for taking on violent left-wingers responding to police shootings of African Americans. According to BuzzFeed News, Rittenhouse attended a rally of then-President Donald Trump last year in Iowa. Rittenhouse’s original GoFundMe was taken down by the site.

The news of police donations to Rittenhouse was first reported by the Guardian. The dataset was provided to the Daily Dot by the transparency group Distributed Denial of Secrets.

Among the donors was a self-identified retired New York police officer who added: “Retired NYPD. Stay strong young man. No probable cause for your arrest whatsoever.”

The donor gave $50 and lists himself on LinkedIn as former NYPD.

Another donor filled in the name form as “retired police officer.” The email address provided matches a police officer who lost his badge after covering up another officer’s drunk driving case. He then had it reinstated.

“i am not entirely sure of the circumstances but i want to help with a fair due process and trial. God Bless,” he wrote.

He donated $25. The Daily Dot was unable, however, to match his identity to that of anyone on the LAPD with the email address provided.

Another apparent former cop heaped praise on his weapons skill: “I am a retired Police Officer and Kyle was acting in self defense from these rioters! All the evidence shows, that Kyle was running away from being struck by a Molotov cocktail and then running away from the rioters who intended on killing him! I also applaud Kyle’s great weapon retention and calmness during the attack on his life!”

That name matches a retired police officer in Oregon. He donated $25.

A person identifying as a former trooper also said he would be “honored” to have Rittenhouse in his squadron: “As an ex-combat Infantryman, I would be honored to have you on my fire-team. This country needs more brave men like you. You are a hero living in a country of gutless cowards. God bless you!”

Numerous others in their donations identified themselves as members of the Marine Corps. One wrote: “As a US Marine who is deployed for 4 combat tours I can tell you that it is a struggle define peace when faced with challenges that force you to question your spiritual beliefs. In all of my experience I’ve come to the conclusion that God does not considered a sin to defend the life and liberty are you Brothers and sisters in Christ. Furthermore God often uses us to restore the balance. Prayers.”

That name provided matches a current self-identified member of the U.S. Marine Corps on LinkedIn. He donated $20.

In another, a self-identified attorney in Oklahoma boasted about being able to get police officers off and offered his service to defend Rittenhouse on Castle Doctrine grounds (also known as “Stand Your Ground” laws).

“I am an attorney in Oklahoma but licensed in WI. I work with the folks who gained an acquittal for a [Police Officer]. My boss has obtained innumerable acquittals over a 20 year span; he and I obtained an acquittal in a capital murder case … on a Castle Doctrine matter.”

The name and email provided matches an attorney in Oklahoma.

The Daily Dot is choosing not to identify the names of the officers, servicemembers, and attorneys who donated in the GiveSendGo breach.

Multiple fundraisers were held for Rittenhouse on this site. In this particular dataset viewed by the Daily Dot, Rittenhouse raised nearly $587,000

Correction: This post originally misstated the number of people killed by Rittenhouse. It is two.