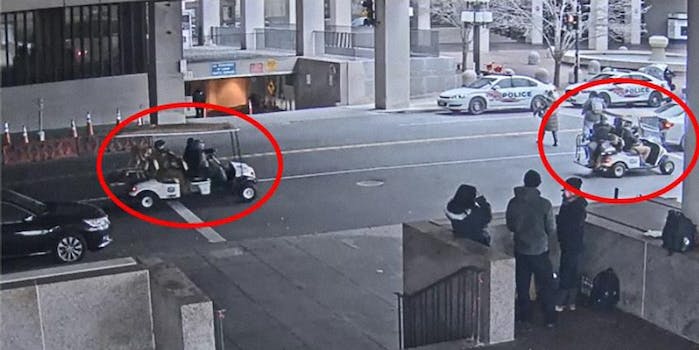 Hundreds have been charged in crimes associated with the Capitol riots that left five dead, including a police officer. While many of the allegations stemming from the failed insurrection attempt are grisly or tragic, some of the latest details are of a decidedly lighter sort.

According to the federal indictment, alleged members of the far-right Oath Keepers stormed the Capitol in golf carts.

Authorities claim they raced and swerved at police.

Images of the purported low-speed chase have also been released.

Other images show Minuta and co-defendant Joshua James, who is reportedly also affiliated with the Oath Keepers, guarding Roger Stone.

There’s nothing funny about thousands of people attempting to violently overthrow the government and murder lawmakers. But many found it amusing that anyone would travel to a would-be insurrection in the mode of transportation favored by senior citizens and mall security.

The indictment claims that over 100 police officers, along with members of the media, were assaulted in the riots, which resulted in millions of dollars of damage.

As he and James rode towards the Capitol, Minuta reportedly said, “It’s going down guys; it’s literally going down right now. Patriots storming the Capitol building … fucking war in the streets right now … Word is they got in the building … let’s go.”

Once at the Capitol, they ditched the golf carts and allegedly linked arms with a group wearing Oath Keepers clothing to form “a stack.”

“Together, the stack maneuvered in an organized and practiced fashion up the steps on the east side of the Capitol—each individual keeping at least one hand on the shoulder of the other in front of them,” the indictment states.

It is unknown what became of the golf carts.

If convicted, James and Roberta face up to 20 years in prison.