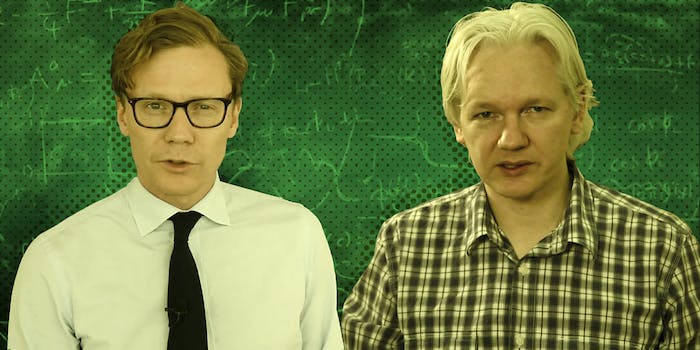 The story around the data analytics firm gets stranger.

It seems like Cambridge Analytica, the mysterious, Steve Bannon-linked data analytics firm partially owned by ultra-conservative billionaires Robert and Rebekah Mercer, has been getting into some hot water lately.

The company’s CEO, Alexander Nix, is making headlines for trying to team up with Julian Assange, the founder of WikiLeaks. As the Daily Beast reported last week, Nix stated in an email to third parties (including Rebekah Mercer) last year that he had reached out to Assange to inquire about distributing the 33,000 missing emails from Hillary Clinton’s private server.

Assange confirmed that the contact occurred, stating via Twitter, “I can confirm an approach by Cambridge Analytica [prior to November last year] and can confirm that it was rejected by WikiLeaks.”

While there’s no proof that the Clinton emails have been hacked or that any third party possesses them (they have not been published on WikiLeaks or elsewhere), President Donald Trump brought up their existence multiple times on the campaign trail, and WikiLeaks published thousands of emails from Clinton’s private server, as well as the emails of her campaign chair, John Podesta, and the Democratic National Committee, in the run-up to the election.

It’s not clear why Nix reached out to Assange—whether he did it independently or was asked by a member of the Trump campaign to do so, nor why the head of a data analytics and marketing company would find it appropriate to engage in or support the release of hacked emails.

Cambridge Analytica did not respond to a request for comment.

But the revelations do link the Trump campaign, however tenuously, to WikiLeaks and Assange, who has worked with RT, the Russian state-owned television network, and who quite likely received hacked campaign emails from Russian sources.

And that’s not all. Earlier this month, it was revealed that Cambridge Analytica had agreed to participate in the House Intelligence Committee investigation into Russian interference with the 2016 election. According to the Hill, the company has agreed to turn over information related to its work on the campaign, although it maintains it is not under investigation and refutes any wrongdoing.

Cambridge Analytica, which reportedly made $5.9 million from its work with the Trump campaign, has come under scrutiny for its methods of influencing the 2016 presidential election. There are questions about whether the company used its own database which, according to Head of Digital Molly Schweickert, contains 4,000-5,000 data points about 230 million American adults.

As the House investigation continues, more questions about Cambridge Analytica’s involvement in the campaign will surely arise—not only about their possible links to Russia but about the way the company acquires and exploits data on all of us.