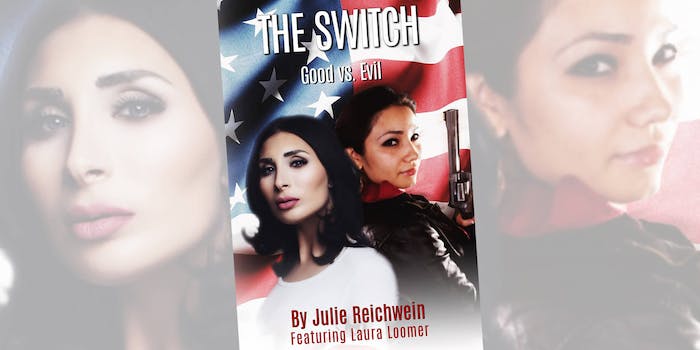 A Laura Loomer superfan has written a novel featuring the conspiracy theorist running for Congress.

In The Switch: Good vs. Evil (called The Switch: Loomered on Amazon), author Julie Reichwein spins a yarn about Loomer as an investigative journalist who teams up with an FBI agent to take on drug cartels, New Mexican jihadists, FBI corruption, a Peruvian Maoist female assassin group, and, perhaps their greatest foe, “devious social media companies out to silence Laura’s message.”

On her website, Reichwein claims that the book is an “adventure ripped from the headlines.” She also says that she used Loomer as a character “[b]ecause she’s a trendsetter who learned guerilla journalism from James O’Keefe’s Project Veritas,” and “[p]eople who follow her love her no fear journalism in confronting corruption and jihadists.”

The first chapter of The Switch introduces FBI Special Agent Maria Quintana-Deon, who quickly apprehends villains La Monstrua and her boyfriend El Monster (literally: ‘female monster’ and ‘the monster’). Unfortunately, Loomer, whom Reichwein says online that she met through a mutual friend on Twitter, only briefly appears in the nine chapters available for free on Amazon. So fans are left to wonder what sort of high-flying action to expect from her on Microwave Mountain, an actual location in the book.

Lucky for them, the 247-page book has 93 additional chapters, so there’s plenty of space left for Loomer to get in on the action.

Loomer isn’t the only real-life character in the book. Because they “can’t trust the FBI,” the heroines get help from Proud Boys Enrique Tarrio and Joe Biggs. Reichwein writes that she was inspired to include the two members of the notoriously violent group after meeting them because she enjoyed their company and felt they were “misrepresented.”

The Amazon description lists Loomer and Tarrio, along with Alex Dunbar, as contributors to the book, which published in October.

As Reichwein laments on her blog, which includes dozens of pro-Loomer articles penned in the two months’ since its inception, as soon as news of the book dropped, the jokes came rolling in.

“Based solely on this, I can almost guarantee that this book contains *at least* one lesbian sex scene. Bare minimum, there’s an awkward bit where Loomer and the FBI agent have to share a hotel room and there’s only one bed,” one man predicted.

Lots of folks had theories about the trailer’s narrator, including that they found him on Fiverr, that it was actually Dan Base, and that he is a sixth-grader. One man even had an idea for some future employment for him: “I need to hire that narrator to read The Night Before Christmas to my kids on Christmas Eve,” he said.

Huffington Post senior editor Andy Campbell was among those theorizing that Reichwein is in fact Loomer. After the Daily Dot contacted the Loomer campaign asking if this was true, a reporter received a response from a different email address with a Loomer.us origin, denying that she is Reichwein and threatening to sue.

Reichwein also denied being Loomer, writing via email, “I am not Laura Loomer. We are friends, and I am helping to promote her congressional run because I believe in her 100%.”

Like Loomer’s response, the email came from a different address than the one contacted.

Regarding the criticisms of the book, Reichwein claims on her blog that left-wing Twitter is “triggered” by it.

“I’m NOT a snowflake, and I will defend Laura Loomer all the way. She has more guts than all of these toads could ever dream of having,” Reichwein writes. “Does it feel good to be insulted, No. I didn’t set out looking to be insulted, I set out to write an entertaining book featuring someone I admire, Laura Loomer. I knew the attacks would happen, and I accept that, but what I refuse to accept is lefties with different opinions being so hate filled.”

People who love The Switch will be thrilled to learn that a sequel is already in the works. Reichwein promises on her website, “It will be even more explosive than this story.”