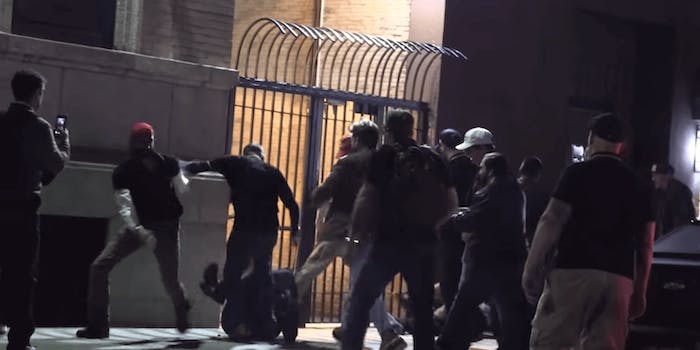 'I made a mistake that night.'

Two members from the far-right group Proud Boys were sentenced to four years in prison on Tuesday for taking part in a “political street fight.”

The New York Times reports that Maxwell Hare, 27, and John Kinsman, 40, were the two Proud Boys convicted. The state Supreme Court judge in Manhattan sentenced the men for initiating a fight between a far-left and far-right protest outside the Metropolitan Republican Club in 2018. Although the opposing anti-fascist protesters were not present at court, it is highly contended that they were associated with “antifa,” a collection of protesters fighting against fascism, neo-Nazis, and white supremacy.

Joshua Steinglass, a prosecutor, suggested a five-year sentence as the “violence meant to intimidate and silence.”

“In cities across America these two groups have repeatedly engaged in violence against one another,” Steinglass said. “It became clear during this trial that violence is very much ingrained in the Proud Boys ethos.”

The fight, which resulted in the arrest of 10 Proud Boys members, followed a speech given by Proud Boys founder Gavin McInnes. The event attracted antifa protesters to the doors of the Republican Club.

Before being convicted of attempted gang assault, attempted assault, and riot in August, the defense claimed the defendants’ actions were that of self-defense. However, video evidence, showing Hare charging at the four protesters, dismantled that. Both Hare and Kinsman allegedly apologized for their actions to the court.

“I made a mistake that night,” Hare said.