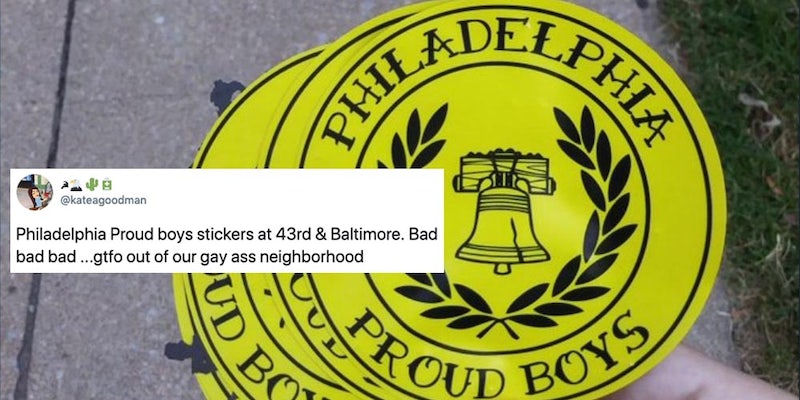 Residents in a Philadelphia neighborhood are accusing the far-right, neo-fascist organization the Proud Boys of making armed “house calls” to harass and threaten private citizens.

At the center of the reported house calls is community organizer Gwen Snyder, who according to her Patreon page, researches and writes about “radical white supremacy, corporate greed, and other pressing justice issues.”

Due to the work she does, Snyder has been on the receiving end of threatening behavior for months, but things appear to have escalated over the weekend of July 1 when she and others detailed late-night visits from armed Proud Boys members, numbering up to a dozen.

“This horror show just gets more and more surreal,” Synder tweeted. “There are now two Philly residents, myself included, who received terroristic late-night visits from a crowd of gun-toting Proud Boys, and a third being threatened. They fucking flew Proud Boys in from across the country for this.”

Proud Boys visited my home late Saturday night to threaten me. 20 showed up to my friend's house apparently planning to attack him, & they've been threatening to show up armed at @EllieAndOtis' home for weeks. pic.twitter.com/qvmjTWK3HN

Her tweets were accompanied by screenshots, one of which claims a Proud Boy flew all the way into Philadelphia from Texas just to make “house calls.”

Synder and others report finding “Philadelphia Proud Boys” stickers placed on their homes and around the neighborhood.

I'm not the only person they visited that night.

They were wearing armor. pic.twitter.com/4JDd7IZ5DC

Snyder provided screenshots of threats and intimidation from a now-suspended, alleged Proud Boy’s Twitter account. In the screenshots, the member posts her home address and claims to have kidnapped her pet cat. Both she and other members in her family are also receiving ominous phone calls from “private numbers” that she believes to be coming from the group’s members.

Here's one of his Proud Boy friends, publishing my address and claiming to have kidnapped my cat.

There's something particularly vile about extremists who try and leverage the safety of innocent animals in their threats, no? pic.twitter.com/TAUHpkrSQM

My parents started getting them, too– when they answered the first time, a low male voice told them, "Gwen had better stop."

They received so many calls in the early hours of the morning that they had to start unplugging their phone at night.https://t.co/wFZaimyvi2

If true, this wouldn’t be the first time the Proud Boys have descended on the City of Brotherly Love—as made evident by the group’s failed “We the People” rally last year. However, it would be exceptionally brazen for them to show up directly to residents’ homes and in this particular pocket of West Philadelphia—a neighborhood known for being a culturally diverse melting pot and accepting of the LGBTQ community.

Yet when Andy Ngo– a right wing propagandist who edits a publication known to deliberately disseminate false stories that have proavably endangered actual journalists– gets some milkshake on his backpack and a cut on his forehead, the outcry is instant. https://t.co/vaziyRJSvq

Information I've received from other researchers who do this work indicates that the local Proud Boys are increasingly desperate and increasingly dangerous, looking for opportunities to enact violence.

"Trying to make me nervous," my ass.

Snyder told the Daily Dot in an email statement that she has been on the Proud Boys “shit list” since the rally when she photographed and identified some of the group’s members. She claims to have had a target on her back ever since. Snyder also says she has connected some of its members to local GOP candidates running for office and believes that some have successfully infiltrated the Young Republicans of Philadelphia.

The Daily Dot will provide updates to this story as they become available.