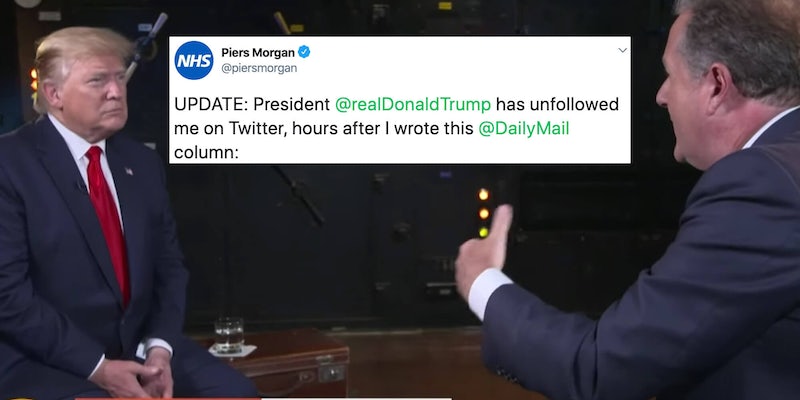 'SHUT THE F*CK UP, PRESIDENT TRUMP,' Morgan said in a scathing column this week.

“UPDATE: President ⁦@realDonaldTrump⁩ has unfollowed me on Twitter, hours after I wrote this ⁦@DailyMail⁩ column,” Morgan tweeted.

Morgan, a long-time friend and supporter of Trump, appeared to reach the end of his rope in a MailOnline column Friday in which he began by telling the president to “SHUT THE F**K UP.”

“Throughout this coronavirus crisis, the leader of the free world has turned the daily White House task force briefing into a rambling two-hour self-promoting rally,” Morgan wrote. “He’s devoted large chunks of them to trashing the media, attacking political opponents, telling us how great he is, and re-writing history as he tries to defend all the mistakes he’s made since the virus first erupted.”

But it was Trump’s recent suggestion that injecting disinfectant could potentially be a cure for COVID-19 that set Morgan over the edge.

“By far the most reckless and dangerous thing President Trump has done is use the most powerful podium on earth to air his batsh*t crazy theories about how to beat the virus,” Morgan added. “And last night he stooped to a shameful new low by suggesting people suffering from COVID-19 should be injected with toxic disinfectant.”

The president also suggested that shining a “tremendous” and “powerful” UV light “inside of the body” could potentially be beneficial for coronavirus patients as well.

Trump has since attempted to distance himself from the embarrassing remarks by claiming that he was merely being “sarcastic.”

Within just 18 hours of the president’s remarks, however, health authorities in New York reported receiving a disturbingly high number of calls from residents reporting that they had ingested bleach or other household cleaners.