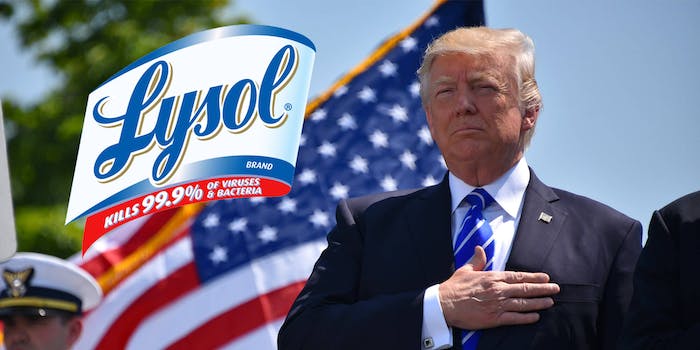 The president suggested that injecting disinfectant may help defeat the coronavirus.

Calls to New York’s poison control centers saw a significant increase this weekend following President Donald Trump’s suggestion that disinfectant could be injected into individuals suffering from the coronavirus.

Reports out of the state show a significant spike in potential poisoning reports not long after the president’s press conference on Friday.

Trump had openly questioned whether disinfectants or even UV light could be inserted “inside of the body” in order to destroy the highly-contagious illness at a recent press briefing.

But it appears the warning may not have been enough for some. In the 18 hours following Trump’s remarks, New York reported receiving twice as many calls as normal to its poison control centers.

As reported by one local NBC affiliate, of the 30 calls health officials received, nine were “specifically about Lysol, 10 about bleach, and 11 about other household cleaners.”

During the same period last year, only 13 calls were received. Of those calls, only two involved bleach while none whatsoever related to Lysol products.

It remains uncertain, however, whether any of the callers specifically ingested cleaning supplies in an attempt to test Trump’s false theories.

While a couple who ingested fish tank cleaner in March admittedly did so after the president repeatedly claimed that hydroxychloroquine could potentially cure the coronavirus, data suggests poison control calls are up in general given the increased use of disinfectants amid the pandemic.

The Centers for Disease Control and Prevention (CDC) has, in fact, reported a 20% increase in such calls across the country between January and March.

In the state of Kentucky, for example, a 30% increase in calls related to disinfectants was also witnessed in March, the majority of which involved children.

Although the jump in calls can’t be linked entirely to Trump, the dangers of promoting the injection of household disinfectants as a possible COVID-19 cure cannot be overstated.