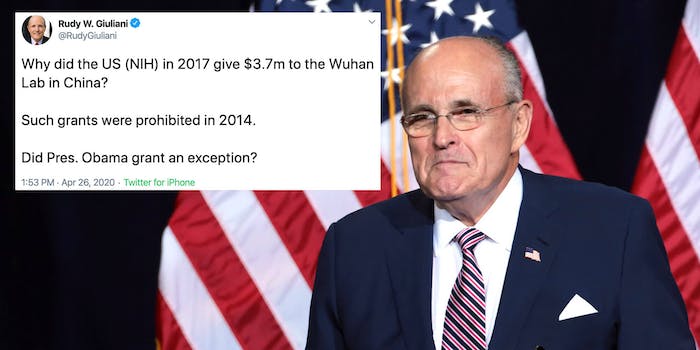 Former NYC mayor doesn’t know who was president in 2017

Or maybe he forgot?

Former New York City Mayor Rudy Giuliani revealed in a tweet on Sunday that he may not know who the president was in 2017.

The famed attorney appeared to suggest that former President Barack Obama is to blame for allegedly giving $3.7 million to a laboratory in Wuhan, China, that year.

There are several problems with the tweet. For starters, $3.7 million dollars wasn’t given to the laboratory.

The laboratory received a small portion of $3.7 million after the National Institutes of Health (NIH) awarded the money to the global environmental health organization EcoHealth Alliance. The nonprofit in turn provided financial aid to help fund research at the Wuhan laboratory.

Despite attempts to paint the funding as conspiratorial, the NIH has for decades been aiding the public health work of laboratories in numerous countries, such as those in Australia, Singapore, and China.

But Giuliani’s inaccurate remarks don’t stop there. The $3.7 million was also not given out in its entirety in 2017. The money was slowly awarded between 2014 and 2017.

The biggest irony of all is that the money given out in 2017, which amounted to approximately $700,000, was approved by President Donald Trump.

Supporters of the president, including Giuliani, have attempted to use the funding to pin the coronavirus outbreak on Obama. The theory also relies on the unproven claim that the coronavirus originated in the Wuhan laboratory.

In fact, as reported by Snopes, public NIH records also show that the government body gave $2.5 million to numerous organizations in China, including Wuhan University, in 2018 and 2019. As should be obvious, Trump was in office in both 2018 and 2019.

And while Obama didn’t officially leave the White House until January 20, 2017, it’s accurate to say that Trump was the president during 2017, especially since he was the one who oversaw the grant payments referenced by Giuliani.

So, to clarify, the only money that ended up in the hands of the Wuhan laboratory in 2017 was done so under the watch of Trump.