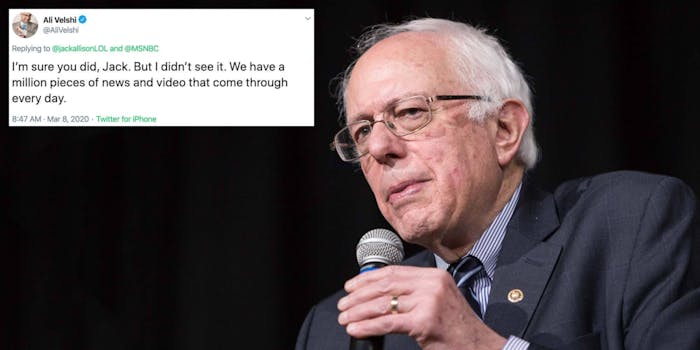 Ali Velshi says he didn't see the disturbing moment because there's a lot of news.

An MSNBC host is receiving pushback online after being accused of trivializing the disruption by a Nazi at a Sen. Bernie Sanders’ (I-Vt.) rally in Arizona on Thursday.

The incident began when a self-identifying Nazi YouTuber unveiled a Nazi flag as Sanders took the stage in Phoenix earlier this week.

Filmmaker Michael Moore brought up the incident during an appearance on MSNBC with Ali Velshi, who claimed not to have seen the widely-reported and disturbing moment. Velshi had just finished questioning Moore over mean tweets allegedly made by Sanders’ supporters online.

“Michael Moore brought up the Nazi flag that was unfurled at a Sanders rally on @AliVelshi on @MSNBC in response to a question from Ali about Twitter trolling,” Allison said. “Ali claims he hasn’t seen the video. I personally texted the information to MSNBC producers.

Velshi responded to Allison’s criticism by alleging that he failed to see the clip as it was among the “million pieces of news and video” that are sent to the network every day.

Allison went on to accuse the network, which has been widely criticized for its coverage of Sanders, of purposely ignoring the story.

Velshi defended himself by condescendingly stating that he didn’t spend as much time online as Allison. But Allison pushed back against that argument as well.

“You said you didn’t see it literally after asking Michael Moore about Twitter posts,” Allison added. “And now you’re painting an antisemitic attack at the Jewish candidate’s rally as some kind of online-only phenomenon?”

Others similarly argued that the network appeared to be downplaying the significance of a Nazi showing up to the rally of a Jewish candidate.

“Click here to see an MSNBC host dismissing a Nazi disrupting a Bernie event as being lost in the noise and only something that people who’re on Twitter care about,” user @mathewolson added.

Sanders, who revealed that he had not seen the flag at the time of the incident, addressed the moment on Sunday in an interview with CNN’s Jake Tapper.

“Obviously, it is unspeakable. It is disgusting,” Sanders said. “It is something, and I got to tell you, I never expected in my life as an American to see a swastika at a major political rally.”

Concerns have since been raised over Sander’s safety alongside calls for the U.S. Secret Service to begin protecting the candidate on the campaign trail.