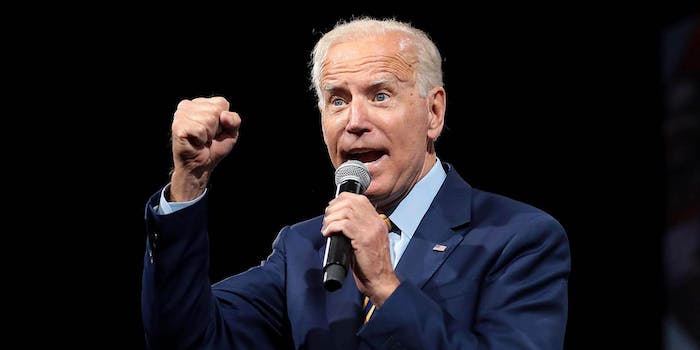 The speech was only seven minutes long.

Democratic candidate Joe Biden unleashed yet another gaffe on Saturday during a stump speech in St. Louis.

The former vice president made the mistake while attempting to entice the crowd by referring to himself as an “O’Biden Bama” Democrat.

“If you want to nominate a proud Democrat, a lifelong Democrat, an O’Biden Bama Democrat, join us,” he said.

The moment, one of many in a series of gaffes for Biden, led to widespread criticism as the belief grows among many that the candidate may not be up to the task of confronting President Donald Trump on the debate stage.

“Obiden. He can’t say his own name,” Twitter user @Chinchillazllla said. “We are all going to die.”

Incredibly, this was not only the only fumble Biden made during his seven-minute speech. Biden also falsely claimed that he had been endorsed by ex-candidate Sen. Kamala Harris (D-Ca.) as well. At the time, this wasn’t true, but Biden has since been endorsed by Harris.

If that wasn’t enough, Biden went on to inadvertently call for Trump’s reelection.

“We can not get reelect, we can not win this reelection,” Biden said. “Excuse me. We can only reelect Donald Trump.”

Biden went on to attempt to save the sentence by adding that Trump would be reelected “if, in fact, we get engaged in this circular firing squad here.”

Biden’s statement was even retweeted and endorsed by Trump himself.

“I agree with Joe!” Trump said.

The numerous misstatements come after several others in just the last week. Following his Super Tuesday win, Biden mixed up his sister and his wife during a victory speech in California.

The candidate also made headlines the day prior in Texas when he botched an attempt to recite the Declaration of Independence.

Whether Biden’s frequent mistakes or his record as a decades-long politician will hinder his ability to obtain the Democratic nomination remains to be seen.