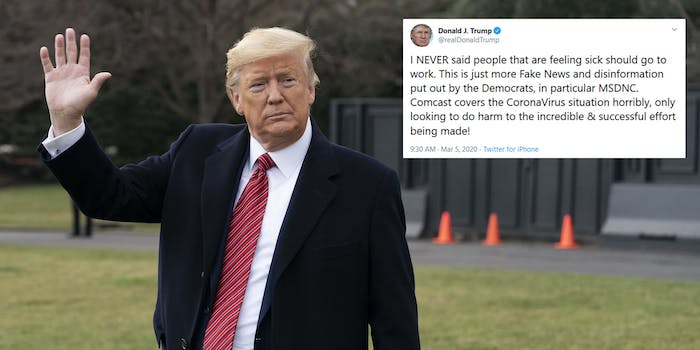 He said people sometimes get better 'sitting around and even going to work.'

President Donald Trump on Wednesday said he “never” said that people who feel sick should go to work amid the spread of the coronavirus.

The president was pushing back at reports about remarks he made on Sean Hannity’s show on Wednesday night where he said people get better when they are “sitting around and even going to work.”

Here’s what Trump said on Hannity:

“A lot of people will have this and it’s very mild. They’ll get better very rapidly. They don’t even see a doctor, they don’t even call a doctor. You never hear about those people. So you can’t put them down in the category of the overall population in terms of this corona flu and or virus. So you just can’t do that. So, if you know, we have thousands or hundreds of thousands of people that get better just by, you know, sitting around and even going to work. Some of them go to work, but they get better.”

“And then when you do have a death, like you had in the state of Washington, like you had one in California, I believe you had one in New York. You know, all of a sudden it seems like three or four percent, which is a very high number, as opposed to a fraction of one percent. Again, they don’t know about the easy cases, because the easy cases don’t go to the hospital. They don’t report to doctors or the hospital in many cases.”

It appears Trump is miffed that people are saying he suggested people should go to work if they feel sick, instead of him saying people “get better” by “sitting around and even going to work”—which, either way, he did not say sick people shouldn’t go to work.

In his denial, the president also accused the media of trying to make the coronavirus look worse—something he’s done in the past.

“I NEVER said people that are feeling sick should go to work,” the president tweeted early Thursday. “This is just more Fake News and disinformation put out by the Democrats, in particular MSDNC. Comcast covers the CoronaVirus situation horribly, only looking to do harm to the incredible & successful effort being made!”