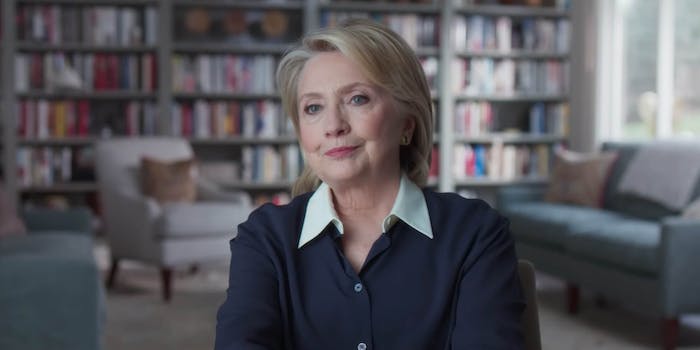 Old wounds from the 2016 Democratic primary are being reopened by a clip of Hillary Clinton taking shots at Democratic presidential candidate Bernie Sanders.

The clip comes from Hillary, a four-part Hulu documentary series about the former secretary of state’s life, which premiered on March 6.

“He was in congress for years, years,” Clinton says in the clip. “He had one senator support him. Nobody likes him, nobody wants to work with him, he got nothing done, he was a career politician, he did not work until he was like 41 and then he got elected to something. It was all bologna and I feel so bad that people got sucked into it.”

This quote from the documentary originally made news in January around the time of the documentary’s debut at the Sundance Film Festival. It even inspired the viral hashtag #ILikeBernie on Twitter and prompted a viral response from Sanders who said, “On a good day, my wife likes me.”

But with Hillary‘s Hulu premiere, clips from the documentary are beginning to make the rounds on social media to an angry response from Sanders’ supporters.

“She’s acting like she’s a Real Housewife… god,” said one user, who posted the clip on Twitter.

Another user dissected Clinton’s words in a Tweet that garnered more than 100,000 likes and 20,000 retweets.

“If you go to Bernie’s wiki, he clearly worked several jobs (Head Start teacher, psychiatric aide, carpenter, filmmaker, writer, freelance journalist) before running for office — they just weren’t white-collar enough for Hillary to respect them,” they pointed out.

Other Twitter users said, “She’s going to hell btw,” and, “It’s on sight” for her.

The viral clip is gaining traction amidst a tense race between Sanders and former Vice President Joe Biden, the former doing worse on Super Tuesday than was originally anticipated.

Clinton’s words have also brought tension to Sanders’ base, which has been actively vying for Sen. Elizabeth Warren’s (D-Mass.) supporters on Twitter ever since she dropped out following crushing losses on Super Tuesday.