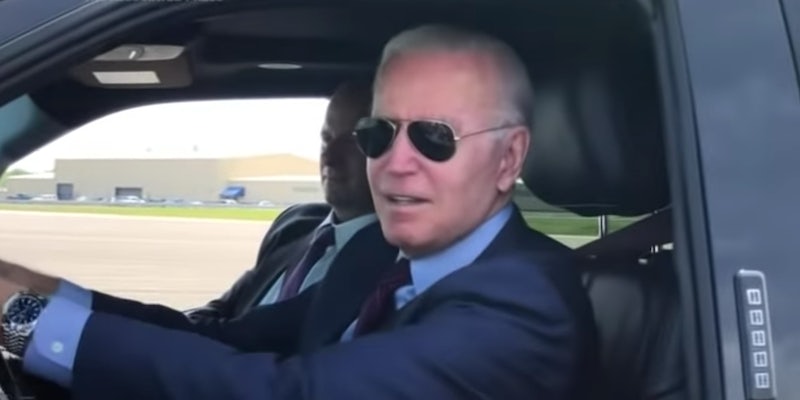 A still frame appearing to show a second steering wheel is easily debunked.

Conspiracy theorists are convinced that President Joe Biden wasn’t actually driving an electric truck on Monday during his trip to Dearborn, Michigan.

The president, who made an unscheduled visit to the Ford Rouge Electric Vehicle Center, spent part of his day test driving the company’s new all-electric F-150 Lightning pick up truck.

“This sucker’s quick,” Biden told a group on nearby reporters.

Yet conspiracy theorists immediately claimed that the test drive was part of a secret ruse designed to mislead the public.

In an article on the far-right website Gateway Pundit, author Jim Hoft—one of the internet’s most notorious promoters of debunked claims—alleged that the vehicle actually featured a second steering wheel.

The allegation, which Hoft based on a single frame of video, also spread among far-right users on Twitter.

Although the passenger, a secret service agent, can be seen stretching his arm out towards the dashboard, numerous other photos and videos taken that day clearly shows no second steering wheel.

One picture taken by Reuters photographer Leah Mills in front of the vehicle, for example, does not show a second steering wheel rising above the dashboard.

Steve Herman, the White House bureau chief for Voice of America who covered the event remotely, described the bizarre claims as “utter nonsense.”

“The video clearly shows this is utter nonsense, there was not two steering wheels,” Herman told the Daily Dot. “This is just the latest of ridiculous conspiracy theories targeting Biden which can be simply dismissed by viewing the actual videos.”

Rep. Elissa Slotkin (D-Mich.), who was with Biden during his tour of the Ford facility, also shared a photo of the truck that did not appear to show a second steering wheel.

Cell phone video of Biden’s test drive posted to YouTube also shows the vehicle moving while the Secret Service agent’s arms are at his side in the passenger seat.

As noted by one Twitter user, the so-called steering wheel was actually a DSLR camera that was sitting on the dashboard. The Secret Service agent appears to have been holding onto the camera to keep it from sliding when Biden came to an abrupt stop near reporters.