The best smartphones of 2017, ranked

It was a great year for smartphones, but which one is right for you?

The smartphone industry desperately needed a jump-start after past year’s uninspired releases, and boy did 2017 deliver. We saw it all: bold decisions from established players, unlikely comebacks, and killer hardware. But which devices stood out above the rest? We’ve compiled the 8 best smartphones of 2017. You can click the link on each phone to check out our full review.

The best smartphones of 2017

Apple took a risk with its 10th-anniversary phone and, for the most part, its decisions paid off. The iPhone X received the highest overall score of any smartphone we reviewed this year. That’s not because it does any single thing better than its Android rivals. Rather, it’s the most balanced device on the market: Its edge-to-edge display is fantastic, the cameras are only notably surpassed by the Pixel 2 XL, and it finally fills the size gap between the iPhone 8 Plus and iPhone 8. Then there are the iPhone constants: superb build quality, blazing fast performance, and decent battery life.

But not even $1,000 will buy you perfection. Apple only put 95 percent of a display on the phone, opting to cut around the sensors and create the dubiously “notch.” Also, touch gestures take some getting used to and, despite how well Face ID works, I still miss the Touch ID fingerprint sensor. There’s also no headphone jack and you’ll need to be extremely careful not to drop this glass-clad phone. Every time I picked it up it felt like I was competing in a high-stakes egg-and-spoon race.

Still, if you can get past these gripes—none of which are deal breakers—and you have $1,000 to spare, the iPhone X is the best phone you can buy.

You can’t go wrong with the Galaxy S8 or S8+. Samsung’s extremely popular flagship smartphones have almost everything you could ask for: a top-notch camera, premium build, gorgeous edge-to-edge display, and even a headphone jack. Best of all, Samsung’s “Experience” skin is a huge improvement over TouchWiz and includes some nice features you won’t find on any other device.

There are some cons. You’ll need to be especially careful not to scuff its curved edges, and the fingerprint sensor is in an awful spot.

The big feature we’re missing here is a dual-lens camera for wide-angle or telephoto shots. If you can wait a few months, rumors suggest the upcoming Galaxy S9 will both fix the fingerprint sensor location and add a second camera. If those hold true, and Samsung can continue to improve its lenses, the S9 may be the phone to beat next year.

Regardless, the Galaxy S8, which can now be found for well below its retail price, remains one of the best flagships on the market.

The fastest Android phones we’ve ever tested also have the best camera of any smartphone ever released. That itself is enough to earn the Pixel 2 and Pixel 2 XL glowing recommendations. Add an elegant design, pure Android Oreo, and day-one software updates and you’ve got yourself some killer devices.

That said, Google’s flagships are somewhat of a letdown. The Pixel 2 doesn’t have an edge-to-edge display, and the Pixel 2 XL has potential long-term burn-in problems. Also, neither has a headphone jack or supports wireless charging, and their battery life is only OK.

Despite that list of complaints and a hefty $650 to $850 price tag, respectively, the Pixel 2 and Pixel 2 XL should be the go-to device for people who want a speedy, reliable phone with excellent software and an almost DSLR-quality camera.

LG has always been the dark horse of the smartphone industry, cranking out solid phones year after year but gaining little recognition for its good work. Now, with the V30, LG firmly puts itself in the big leagues. In fact, if it weren’t for a few small annoyances, it would be vying for a spot with the iPhone X on top of this list.

You could argue the V30 offers more than any other smartphone released this year. Not only do you get a capable dual-lens camera, edge-to-edge screen, and awesome design like other top phones, but the V30 is also waterproof, comes with a headphone jack, supports wireless charging, and has surprisingly long battery life.

Sounds like the perfect smartphone, right? Well, almost. While the V30 has speedy performance, its heavy Android skin looks dated and feels half-baked. Its front-facing camera is also terrible and an unlocked price of $800 puts it squarely in Pixel 2 XL and Galaxy S8+ territory.

What a comeback. The infamous Note 7 almost put an end to Samsung’s beloved “phablet” line after the company was forced to issue a recall following reports of explosions. Samsung hit rock bottom in November last year and it wasn’t clear if it could ever recover. Fast forward a few months and the South Korean giant is releasing the Galaxy Note 8, the best big-screen phone ever made. The Note 8 takes everything we love about the Galaxy S8+—its incredible display, premium build, and top-notch camera—and brings it to the next level.

Its even larger 6.3-inch screen comes with a handy S-Pen stylus that’s both responsive and accurate. The Note 8 also keeps the proven 12-megapixel camera from the GS8 and adds a secondary telephoto lens for zooming and taking portrait pictures.

But don’t start thinking about how you’re going to finance this beast just yet. The Note 8 definitely isn’t for everyone. Not only is gigantic, it’s also very heavy. Oh, and it costs $950. So unless you’re certain you need a big phone with a stylus, you should probably look elsewhere.

Let’s do a little flow chart exercise. Do you want to spend $1,000? No? We don’t blame you. Now, do you want the best iPhone you can buy? If you answered yes, there are only two devices to consider: the iPhone 8 and iPhone 8 Plus. Our advice from there is to forget about the few perks the iPhone 8 Plus holds over its smaller sibling and pick the one that best fits you.

Apple would have more appropriately named these the iPhone 7s and iPhone 7s Plus, as there weren’t many changes made from the previous versions. But that’s OK because these phones are workhorses. They’re lightning quick, come with improved cameras, and now support wireless charging.

The only reason they fall short of their Android rivals is that neither sports an edge-to-edge screen. And, for whatever reason, they’re only available in two extreme sizes.

A phone that was overshadowed by its competitors before it ever launched, the G6 doesn’t get near the credit it deserves as one of the best smartphones of 2017. Because of its waning popularity, the phone can be purchased for well under MSRP. At its current low price of $400, the G6 is an absolute steal. For the money, you get an awesome edge-to-edge screen, headphone jack, waterproof rating, and a camera that can carry its weight.

There are some tradeoffs to buying the G6 over, say, its sibling the V30. Its lightweight design, while comfortable to hold, just doesn’t feel very premium. Also, battery life could be improved and LG’s software, like the V30, isn’t up-to-par with that of its Android rivals. Still, for less than half the price of the iPhone X, you really can’t go wrong. 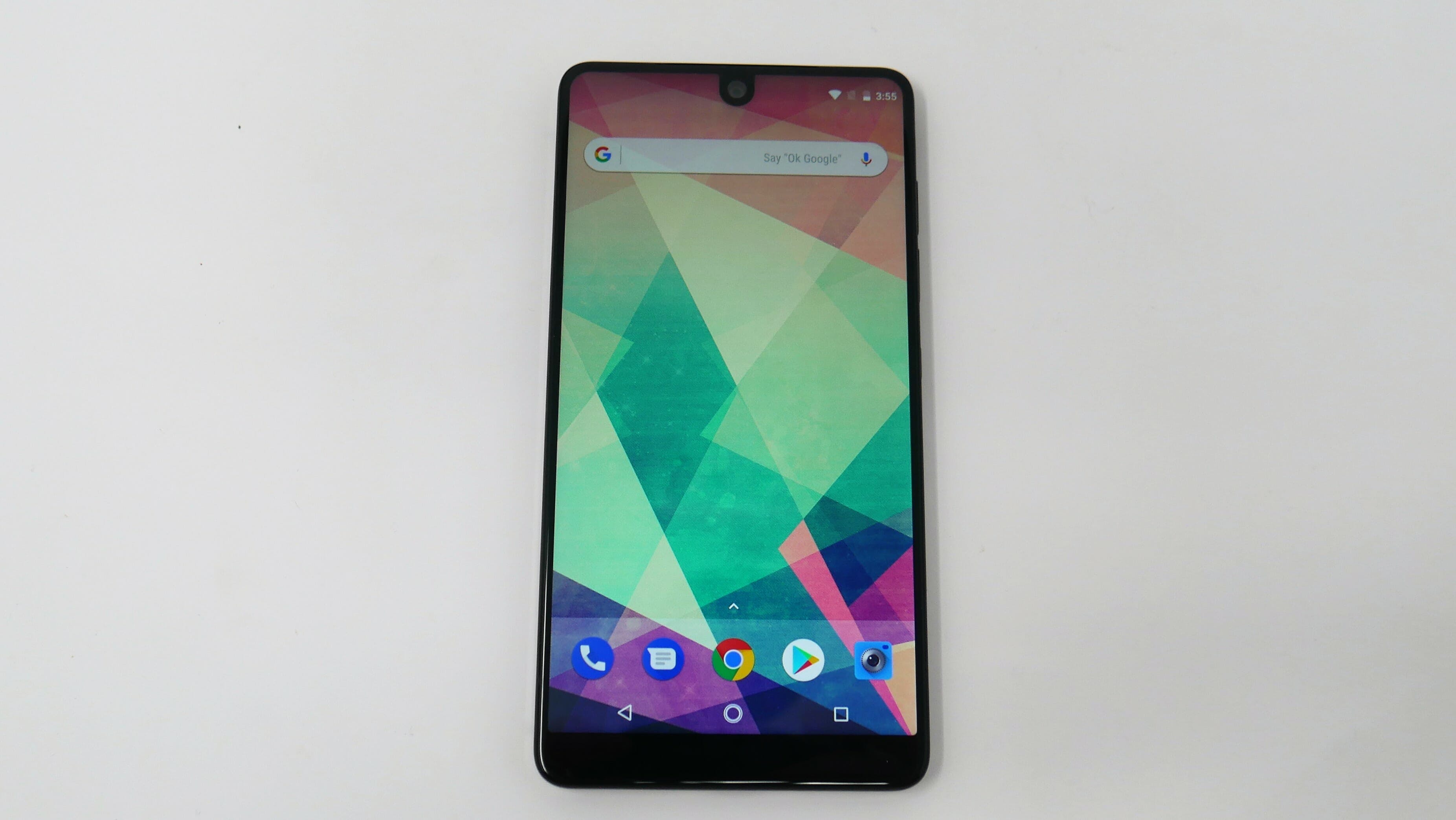 The first smartphone from Android creator Andy Rubin is a good option for those who want a no-nonsense device with a striking design. Sporting a truly edge-to-edge display, the Essential Phone made the notch cool months before we knew about the iPhone X. OK, maybe not, but it looks much better on this device than the iPhone, and its 5.7-inch display is a sight to behold.

Other reasons to consider the Essential Phone include its unique design, extremely quick performance, and clean Android skin. But what really makes the phone so compelling is its recently reduced price tag. Poor commercial sales forced the company to mark it down from $700 to $500 (it was $400 on Black Friday), putting it firmly in the mid-tier price bracket.

But we have our reservations. Even after multiple updates, the Essential Phone’s camera isn’t very good, especially in low light. It’s also missing several features, including waterproofing, wireless charging, expandable storage, and a headphone jack. If you can find it at the same or lower price, we prefer the LG G6 (you might also consider the OnePlus 5T).