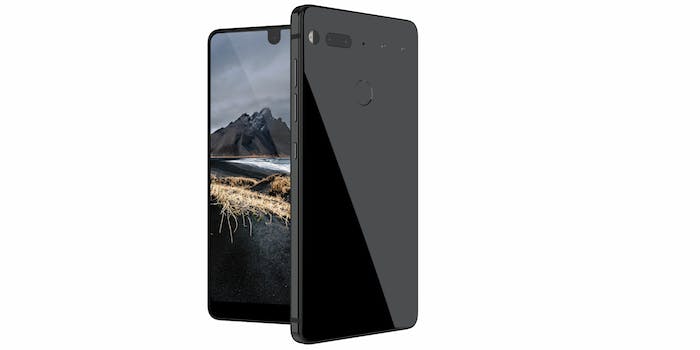 The phone will start at $700, and be available on all major carrier in the U.S.

The creator of Android finally unveiled his much-anticipated new smartphone, and it is shaping up to be one of the most exciting devices in years.

Essential Phone, founded by Andy Rubin, is a high-end phone with a truly edge-to-edge display and modular design. It runs on Android, and will cost $700 with top-of-the-line specs, which includes a Snapdragon 835 processor, 4GB RAM, 128GB storage, and 3040mAh battery.

One of the first things you’ll notice about the device is how its QHD-resolution screen improves on the Galaxy S8 and LG G6’s “edge-to-edge” displays by expanding it to the very top of the phone, and even wrapping it around the 8-megapixel front-facing camera. While this does look rather awkward, it allows the phone to remain compact despite its large 5.7-inch display.

The Essential Phone has a dual-lens setup similar to Huawei’s P9, which uses the second lens for monochrome images instead of telephoto, bokeh, or wide-angle shots. This should improve low-light images and let you take cool black and white photos.

The device is built with a combination of ceramic and titanium, which Rubin claims is better able to withstand a drop than its competitors. The Essential will not be adorned with any ugly logos, and you should expect it to run on something very close to stock Android—a relief for everyone who is tired of third-party skins. Rubin believes “devices are your personal property” and says the company won’t force you to have “anything on them you don’t want to have.” Let’s hope that includes carrier logos.

The phone’s most unique feature is its modularity, a concept both LG and Google failed to make popular. Like the LG G5, the Essential Phone will be launched with a number of accessories that can be connected to the phone’s magnetic connector with wireless data transfer. Some of those accessories include a charging pad, and 360-degree camera that clips to the top of the phone.

Essential Phone comes with only one port in the form of USB-C. Yes, you’ll need the included 3.5mm adapter to use your wired headphones. It’s a strange omission, especially since the company’s website asks, “Don’t you hate it when you have to buy new dongles, chargers, and accessories every time your phone is upgraded?” Yes, we do, so please include a 3.5mm headphone jack next time around.

The phone will be coming to the U.S. first on all major carriers. It is available for pre-order for $700, and will come in four colors: black, white, grey, and blue.