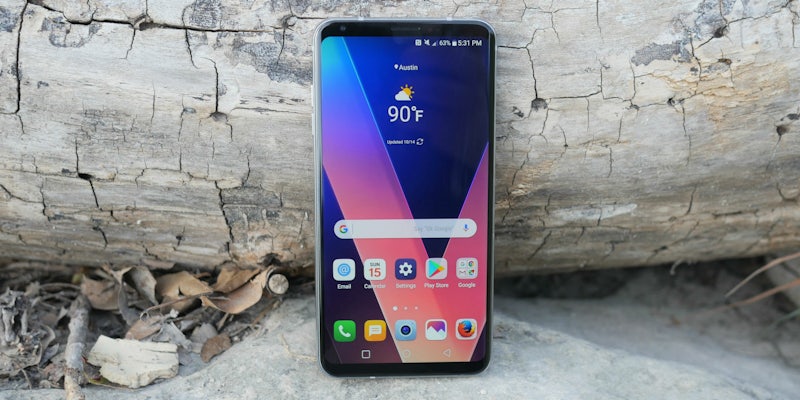 This is LG's best phone ever, by a distance.

I closed my G6 review wondering how LG could convince diehard Apple and Samsung fans to reconsider their predictable buying habits. It didn’t take long to get an answer: the LG V30, a multimedia powerhouse with a pragmatic design and a set of intriguing features found on no other flagship device.

On paper, the V30 sounds like the perfect smartphone, but is LG’s execution good enough to recommend it ahead of its battle-tested foes? Let’s take a look.

With Gorilla Glass 5 front and back panels and a shiny aluminum body, the V30’s appearance is striking and sophisticated. In fact, it’s one of the best-looking phones on the market.

It’s also very comfortable to hold. Subtle curves on the sides of the glass make it form to your hand, helping you forget about its oddly wide frame. And despite its big screen, the V30 is extremely lightweight at just 5.57 ounces compared to the Note 8 (6.88 oz) and iPhone 8 Plus (7.13 oz). I was dumbfounded the first time I picked it up, and still can’t wrap my head around how a phone with such a large battery and two slabs of glass can weigh so little.

I’m a sucker for symmetry, and everything on this device is lined up perfectly, from the dual-lens cameras on the back to the center-positioned fingerprint sensor.  I’m also a fan of the dedicated volume up/down buttons, and there’s something about the look of the speaker grill that reminds me of those old chrome Mercedes race cars. Even the grey antenna strips and plastic trim around the ports give this sleek slab of aluminum some extra flare.

The V30’s beauty isn’t just skin deep, either. It tops the new iPhone 8 with an IP68 waterproof rating.

Every phone to date has a design flaw holding it back from greatness, whether it’s the Note 8’s heft, the iPhone 8 Plus’ thick bezels, or the S8’s poor fingerprint placement. The LG V30 doesn’t. It’s the best-designed phone of the year… for now.

I was hoping to drop “OLED” and “bezel-free” followed by some glowing adjectives in this section and move on, but there are some frustrating quirks that need to be addressed.

The most noticeable is color shifting, or when the display’s colors—especially white—change when viewed at different angles. This was tough to catch on camera, but the photo below should give you a good idea.

As you can see, whites appear warm from straight on but quickly shift to blue when viewed at an angle. It’s distracting, but not a deal-breaker.

Even more concerning are reports of poor light uniformity causing the display to look smudgy. I didn’t run into this problem during testing, and it appears others buyers haven’t either, so this is likely a quality control issue.

Despite the color shifting strangeness and without any uniformity issues, the V30’s large 6-inch display is gorgeous. Its 2880 x 1440 resolution keeps images and text looking crisp while the benefits of LG’s P-OLED shine through. Colors are vivid and saturated, max brightness is good enough for use under bright sunlight, and white balance is top notch.

Best of all, the V30 sports a wide 18:9 edge-to-edge display that takes up almost the entire front of the phone. I’ve mentioned a few times just how comfortable the V30 is to hold, well, this is a big reason why. Ignoring potential issues for a moment, the V30’s excellent OLED bests the iPhone 8 Plus and is only rivaled by the Galaxy S8 and Note 8.

LG’s version of Android 7.1.2 Nougat is the ugliest I’ve seen in a while. App icons look dated, and the AT&T unit we were given was filled with distracting bloatware.

I’m also not a fan of how LG handles apps. Out of the box, the V30, like its predecessors, doesn’t include an app drawer. You can go into the settings and add one if you’d like, but it can’t be accessed with a swipe up from the main screen like on the Pixel or Samsung devices.

That might not sound like a big deal, but it’s an annoyance if you’re used to the convenient gesture. Instead, LG lets you swipe down from the home page to access a menu that shows recent conversations, apps, and activities. But limited customization options make a seemingly good solution end up feeling like a half-baked attempt at creating something original.

While a more hands-off approach would have benefited the V30, there are some nice additions here. For one, “KnockOn” is back, a feature that lets you wake or sleep the V30 by double-tapping its display. The manual camera interface is also an improvement over Android’s overly simplistic approach. Again, it’s not perfect. It makes sense for LG to emphasize the V30’s new “Cine effects” video filters, but putting the record button right next to the shutter button is just poor design.

What LG calls “Floating Bar” is another nice addition. It looks and acts a lot like Samsung’s Apps Edge. When enabled, a small arrow persistently floats on the edge of the screen, allowing for quick access to customizable apps. I turned it off immediately, preferring to keep the beautiful display uninterrupted, but it’s there if you want it.

Like the Galaxy Note 8, the V30 does not run Google’s latest Android Oreo, and LG already said the phone won’t be updated until the end of this year, so you’ll want to look elsewhere for the latest and greatest software.

The Snapdragon 835 powering the V30 is the same system-on-a-chip found in the Galaxy S8 and Note 8. Its proven to provide excellent performance across the board and did just that in our tests, despite having to deal with mounds of bloatware and LG’s heavy skin.

The V30 was snappy and responsive when navigating Android’s interface, and I had no problems quickly opening apps and running graphic-heavy games. No, it doesn’t come close in benchmark tests to Apple’s new A11 Bionic-powered phones, but the practical differences are negligible.

That said, I did come across some concerning performance hiccups, and I’m not sure where to place the blame. At times, the display reacted slowly or didn’t respond at all. Perhaps I should have expected as much considering the above image was the first thing the V30 greeted me with. Thanks for the heads up, LG. The issue seemed to sprout up randomly and fixed itself after a short time, but keep an eye out for similar reports.

LG marketed the V30 as a multimedia machine for photographers and videographers, and it’s not hard to see why. On the back are dual-lenses, a 16MP main with a bright f/1.6 aperture (the largest on any phone) and another 13MP f/1.9 capable of taking super-wide-angle shots. Combine that with laser autofocus, optical image stabilization, and a real glass lens, and you’ve got yourself one of the most appealing setups out there.

In practice, the photos are a mixed bag. Most of the images I took fell between very good and excellent, but LG’s overprocessing makes some shots look unnatural and leads to a lot of inconsistency. It feels like the V30 tries much harder to take the same shot the iPhone 8 Plus or Pixel take with ease.

The V30’s lens struggles in bright conditions, particularly with indirect sunlight. You can see how the blue sky is completely blown out in the top-right corner of this shot.

The second lens is a nice improvement from past editions, exhibiting less pronounced edge distortion and better color accuracy. This was taken with the normal lens…

…and this was taken at the same spot with the super wide-angle lens.

The 5MP front-facing camera on the V30 is one of the worst you’ll find on a flagship phone. Just check out how smooth my face looks in this picture. I look like a marshmallow.

Audio performance is a tale of two halves. Let’s start with the bad: the mono bottom-firing speaker. You’ll want to avoid it at all costs. Music sounds tinny and thin, much worse than the decent Note 8 and nowhere near as good as the iPhone 8 Plus. The V30 can fill a small room at max volume as long as you’re OK being subjected to ear-piercing distortion. The only thing that stopped my suffering was when I accidentally covered the speaker grill with my pinkie, which happened far too often. My advice: Factor in the price of a Bluetooth speaker or headphones when you purchase the V30.

Now for a feature I’ve been waiting to rave about: the V30’s built-in Hi-Fi Quad-DAC (digital-to-analog converter). It didn’t disappoint. As others ditch the 3.5mm headphone jack, LG chose to make it better than ever—a decision that, if you ask me, sounds pretty damn courageous. Wired audio sounds excellent on the V30. With the DAC flipped on, The Killers’ jam “Tyson vs. Douglas” sounded full and energetic playing through my Oriveti in-ear headphones while Lewis Capaldi’s intimate ballad “Bruises” oozed appropriately. You won’t get this sound quality using Bluetooth, so music aficionados should look no further.

Again, there appear to be inconsistencies with the V30’s performance. A quick Google search for “V30 battery life” will leave you none the wiser. Some users claim their units last just hours on a charge while others praise the battery for easily getting through a day.

I, fortunately, found myself in the latter camp. My unit had juice to spare after a long day browsing the web, watching YouTube videos, and opening apps at about half brightness. It’s an impressive result and similar to what I got with the Note 8 and iPhone 8 Plus.

The V30 is compatible with Qi wireless charging, so you can top off its large 3,300-mAh battery by placing it on a charging pad instead of fiddling with wires. It also supports Qualcomm’s Quick Charge 3.0 for fast charging via USB-C.

As cliché as it may sound, I really wanted to love the V30. It’s the perfect size, has an excellent design, and comes with just about every feature one could ask for, including some awesome tech for wired headphone buffs. And at around $800 (no official unlocked price yet), it’s slightly more affordable than some of its top competitors.

But like that depressing split-screen scene in 500 Days of Summer, the reality of the V30 didn’t live up to my lofty expectations. Some heavily-skinned Android software, terrible speakers, and inconsistent camera hold it back from perfection. That doesn’t mean it’s not the right phone for you. It’s just not as good as it should, or could, have been.