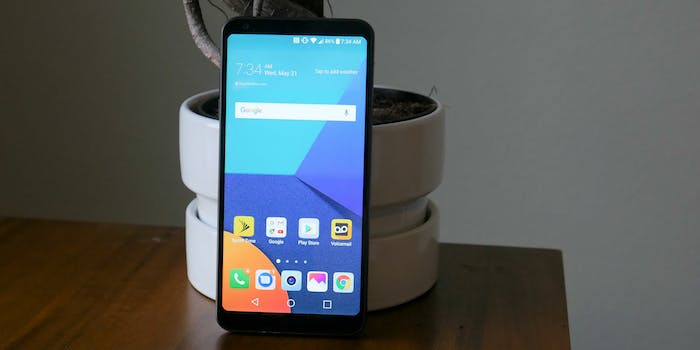 Review: LG G6 holds its own against iPhone 7 and Galaxy S8

While battery life can be improved, the G6's edge-to-edge display and premium materials make it the best LG phone to date.

LG is going toe-to-toe against its biggest rivals with the G6, abandoning a number of unique features that helped its predecessors stand out from the competition. Gone is the modular design of the G5 and the removable battery of past flagships. In its place is a device that feels a lot more like a traditional smartphone—one that will surely be compared to the likes of the Samsung Galaxy S8 and iPhone 7. But has LG finally created a phone good enough to convince Samsung and Apple loyalists to give them a shot?

The first thing you’ll notice about the G6 is how its 5.7-inch display appears to take up the entire front of the device. Anyone who has owned an LG G-series phone might not be struck by its effect, but you’ll be in for a real treat coming from the iPhone or Google Pixel.

The G6 feels more premium than any of its leather or primer-covered predecessors. The front and back are covered in Gorilla Glass, while the frame is built out of aluminum. Despite those improved materials, the device is surprisingly lightweight, coming in at just 5.75 ounces. For comparison, the iPhone 7 Plus, which has a smaller 5.5-inch screen, is much heavier at 6.63 ounces.

LG’s decision to drop the G5’s modularity allowed it to add IP68 dust and water resistance. The few design cues LG kept are the G6’s rear fingerprint sensor and dual cameras. It moved the volume buttons from the back of the phone to the side.

About that water resistance, G6’s IP68 rating means that it can be submerged in water for 30 minutes at a depth of up to five feet, which means you don’t have to worry about it falling in your pool (or your French press).

The G6’s 2880×1440, 5.7-inch display is one of the best around. That shouldn’t come as a surprise given the company’s pedigree for producing gorgeous 4K TVs. LG yet again opted for LCD technology, which means you still won’t get the unrivaled black levels and extremely vibrant colors found on AMOLED displays, but I can’t imagine anyone complaining about the G6’s HDR-enabled panel.

I watched several movie trailers and random clips of animals shot with 4K cameras, and each time I was greeted with a flurry of vibrant colors and exceptionally crisp detail. I even preferred the G6’s display to the one found on the iPhone 7 Plus because of its slightly cooler white balance, which allowed the colors to stand out a bit more. Aside from the white balance, both displays exhibited similar characteristics, including impressive screen brightness at well over 500 nits, a common measurement for smartphones and TV that measures the amount of light that gets sent to your eye in a given area. In short, the G6 gets as bright as the iPhone 7 Plus and is clearly visible even on the brightest days.

If you think the device looks a bit like a baguette, it’s because LG went with a 2:1 aspect ratio, which means it’s a lot longer than it is wide. This makes it much easier to hold the phone with one hand and should be a big benefit for anyone with smaller hands who would otherwise struggle to reach their thumb to the opposite edge of the display.

You’ll also notice the corners of the display are curved. LG says this mimics the exterior of the phone and adds durability. I couldn’t help but notice it every time I picked up the G6. It’s not necessary a bad thing, but it might take some getting used to.

The G6 comes out-of-the-box running Android Nougat, the latest operating system from Google. It’s not pure Android, but LG has at least included a third-party skin that offers a solid experience overall. The South Korean company appears to have learned a lesson in restraint, and its latest spin on Android allows Google’s streamlined interface to rise to the surface instead of being hidden by bloatware.

LG faithful will be happy to know the company kept what many argue are its best features in Knock Code and manual camera controls. Knock Code lets you turn your display on by simply tapping the screen, and manual camera controls allow photography enthusiasts to adjust settings like ISO, shutter speed, and focus depth. It’s a big perk for people who are serious about photography, and it makes Android’s stock camera interface look downright childish.

The LG G6 performed admirably out of the box, despite being powered by last year’s Snapdragon 821 processor. You might have been disappointed to find out that LG’s newest flagship wouldn’t include the Snapdragon 835 found in the Samsung Galaxy S8, but rest assured: The 821 is no slouch. In fact, it’s the same processor powering the Google Pixel, one of last year’s highest-praised devices. Playing graphic-intensive games, running multiple apps, and navigating the OS didn’t seem to impact the G6’s swift performance.

LG has been quietly releasing excellent smartphone cameras over the past few years, but they’ve been largely overshadowed by Samsung and Apple’s offerings. This time around, LG opted for two 13-megapixel rear-facing lenses to replace the G5’s 16MP primary and 8MP wide-angle lens.

The results are impressive but short of remarkable. I took the G6 on a photo shoot with the Google Pixel and iPhone 7 Plus, a few of last year’s very best camera phones. The G6 kept pace, outdoing its rivals in certain conditions but falling short in others. I was impressed by the amount of detail the G6 was able to capture, and its extremely close macro distance bested its rivals. Unfortunately, it didn’t do as well with low-light shots, and its images weren’t as pleasantly saturated as those on the Pixel or iPhone.

Here are a few photos that show what the G6 is capable of:

LG ditched one my favorite features on the G5 and V20: the quad DAC for enhanced audio output. It still has a headphone jack, but that boost in wired audio quality found on previous LG devices made a big difference when using headphones that require a bit of extra juice.

The bottom-firing speakers got loud but sounded thin and tinny, especially when compared to the iPhone and Pixel. The unfortunate location of the speaker is a result of using the entire front of the device for the display—a trade-off I was more than happy to accept.

The G6’s battery life isn’t great, and that’s a shame considering it’s the first LG flagship in a long time to not feature a removable battery. It’s not all bad. I was able to get through a day on a single charge with low-to-medium use. The duration of the phone’s 3,300mAh battery will depend a lot on how bright you keep its display throughout the day. At peak brightness, the phone will only get a few hours of battery life. Drop the brightness down to 50 percent and you should easily make it through your day without having to charge back up.

The G6 can be charged wirelessly and is compatible with Qualcomm’s Quick Charge 3.0 technology.

Should you buy the LG G6?

The G6 is a return to form for LG after last year’s failed G5 experiment, and it is easily one of the best smartphones on the market. The edge-to-edge display with its 18:9 aspect ratio is a sight to behold, and the phone’s glass and aluminum build make it feel more premium than any of its predecessors. LG has even improved its software by letting Android take center stage.

We would have liked the battery to last an hour or two longer, and it’s a shame the G6 doesn’t ship with the latest Snapdragon processor—if only for added assurance that things won’t slow to a crawl years down the road—but those are minor gripes when you look at the whole package.

Starting at $700, the G6 is an excellent device that I easily recommend to anyone looking for a compact, high-end alternative to Samsung’s Galaxy line or Apple’s iPhone. But with the competition continuing to evolve, the question still remains: What can LG do to stop being an alternative and start producing a must-have device?