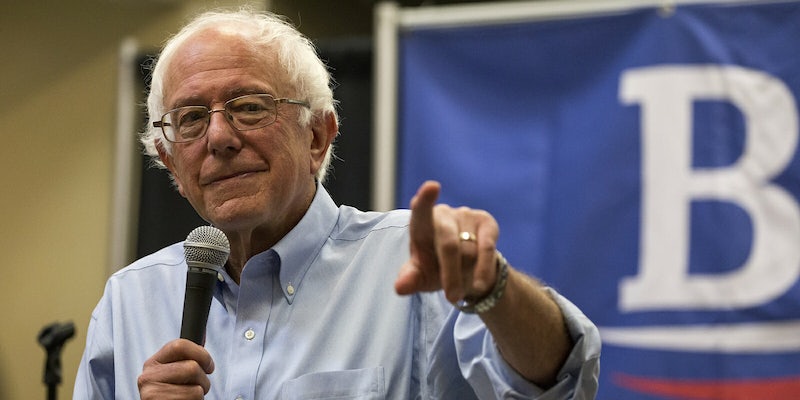 Bernie Sanders comes out against CISA, a controversial cybersecurity bill

Sanders isn't sure yet whether he'll join a potential filibuster of the bill.

Sen. Bernie Sanders opposes a controversial cybersecurity bill that could soon come up for a vote in the Senate, his office tells the Daily Dot.

Sanders’ stance on the Cybersecurity Information Sharing Act in its current form aligns him with privacy advocates and makes him the only Democratic presidential candidate to stake out that position, just as cybersecurity issues loom large over the 2016 election, from email server security to the foreign-policy implications of data breaches.

The Senate is preparing to vote on CISA, a bill to address gaps in America’s cyberdefenses by letting corporations share threat data with the government. But privacy advocates and security experts oppose the bill because customers’ personal information could make it into the shared data.

Sanders, an independent Vermont senator and leading 2016 Democratic presidential candidate, evidently shares some of those concerns.

“The biggest CISA wildcard is former Secretary of State Hillary Clinton, who faces a cybersecurity controversy of her own.”

That position puts Sanders at odds with leading Republican candidates, including former Florida Gov. Jeb Bush, who slammed Senate Democrats for blocking swift passage of CISA by demanding privacy-focused amendments. In his cybersecurity plan, which he released in September, Bush called on President Barack Obama to “lean on” those senators to let CISA pass.

Former HP CEO Carly Fiorina, who has gained support in recent polls thanks to a strong second debate performance, supports CISA, saying it would have helped prevent recent cyberattacks by spurring public–private collaboration. Retired neurosurgeon Ben Carson has not taken a position on the bill, and his campaign did not respond to a request for comment regarding the legislation. Sen. Marco Rubio (R-Fla.), the only presidential candidate who sits on the Intelligence Committee, supports the bill and voted for it in committee.

A spokeswoman for businessman Donald Trump, the GOP frontrunner, declined to address Trump’s opinion of CISA.

The only other candidate who opposes CISA is Sen. Rand Paul (R-Ky.), whose website describes CISA as “a so-called ‘cybersecurity’ bill” that “is packed with vague definitions” and “would transform websites into government spies.”

The biggest CISA wildcard is former Secretary of State Hillary Clinton, the Democratic frontrunner, who faces a cybersecurity controversy of her own stemming from her use of a private email server during her four years at the State Department. Clinton’s campaign did not respond to repeated requests for comment about her position on CISA.

Former Maryland Gov. Martin O’Malley—who polls a distant fourth behind Clinton, Sanders, and potential candidate Vice President Joe Biden—backed CISA in a June op-ed. O’Malley wrote that the Office of Personnel Management (OPM) hack, which exposed the records of nearly 22 million federal employees, demonstrated “the urgent need to advance a new agenda to improve our nation’s cybersecurity.” An O’Malley spokeswoman did not respond to an email asking what O’Malley thought of privacy groups’ criticisms of CISA.

Sen. Ron Wyden (D-Ore.), CISA’s leading congressional critic and the only Intelligence Committee member to vote against it in committee, has promised to oppose the bill’s final passage by any means necessary, but he has not specifically threatened to filibuster it.

Given the broad support for CISA in the upper chamber, any such attempt to block it from proceeding to a final vote would face long odds.

Sanders has not decided whether or not to join a potential filibuster. His office told the Daily Dot that he is waiting to see which of the 22 proposed amendments get votes on the Senate floor. The Senate’s Republican leadership may allow votes on some of the privacy amendments in an attempt to move things along, but no deal has yet been reached.

Sanders introduced an amendment to CISA in August that would establish a “Commission on Privacy Rights in the Digital Age.”