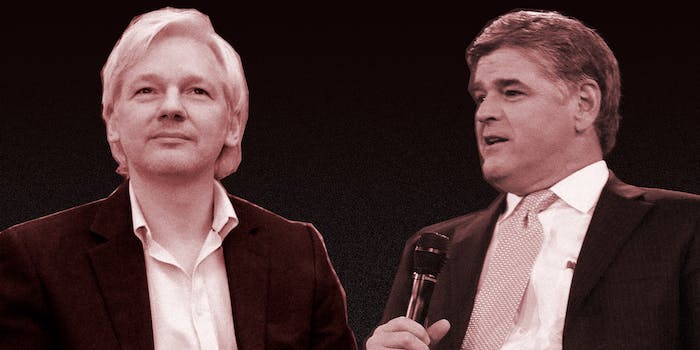 WikiLeaks’ Assange to Sean Hannity: ‘Our source is not the Russian government’

Julian Assange has claimed to not know the source of leaks in the past.

In an interview to air Tuesday night, WikiLeaks founder Julian Assange will repeat the claim that his organization did not receive stolen Democratic emails directly from the Russian government.

“We can say, we have said repeatedly, over the last two months, that our source is not the Russian government, and it is not a state party,” Assange told Fox News host Sean Hannity during an interview conducted in the Ecuadorian embassy in London, where Assange has been holed up for the past four years.

Speaking to Hannity, Assange also said it was “strange” that the FBI and the White House had not mentioned WikiLeaks in recent statements about the cyberattacks. “If you look at most of [President Obama’s] statements, he doesn’t say that—he doesn’t say that WikiLeaks obtained its information from Russia, worked with Russia,” Assange said.

With help from the Ecuadorean government, Assange has been avoiding extradition to Sweden over allegations that he committed rape while visiting the country in 2010. Adamant the accusations are unfounded, Assange believes that appearing in Sweden would give U.S. authorities the opportunity to extradite him over prior leaks containing classified U.S. military and diplomatic files. Assange was interviewed by a Swedish prosecutor at the Ecuadorian embassy in mid-November.

In February, a United Nation’s panel concluded that Assange was being “arbitrarily detained” by the British government.

It remains unclear who, specifically, provided WikiLeaks with access to stolen emails from the Democratic National Committee (DNC) and Hillary Clinton campaign chairman John Podesta; however, U.S. spy and law enforcement agencies have concluded—reportedly with a high degree of confidence—that the hackers targeting the Democrats received orders from Moscow.

Moreover, U.S. intelligence officials have asserted that such orders could have only been issued at the highest echelons of the Russian government, which has denied any involvement in the theft or disclosure of the DNC and Podesta emails.

Assange, who typically does not reveal information about his sources, previously dismissed claims that the disclosures were intended to interfere with the U.S. election. “Saying nothing leads to a vacuum into which false claims about our sources can be projected,” Assange said in November. “We tolerate such claims until they are used to distract from the publication.”

CrowdStrike, a private security research firm hired by the Democrats to investigate the breach, is said to have nearly incontrovertible proof that the actors who infiltrated the DNC also launched attacks against the Ukrainian military following Russia’s invasion in 2014, as documented in a recent report.

Assange has not offered any clues as to who the WikiLeaks source may be, except to say it isn’t the Russian government or any other state actor. WikiLeaks has also not provided any statements indicating whether it actually knows the identity of its source; the organization typically uses anonymizing software to conceal its sources’ identities and has claimed to not know the identities of sources in the past.

“We have made one statement months ago and repeated it ever since. Not a state party. That’s it,” a verified WikiLeaks account told the Daily Dot via Twitter.

The Wikileaks account did not respond when asked to elaborate on how Assange might have determined that his source was not working on the behalf of any government.