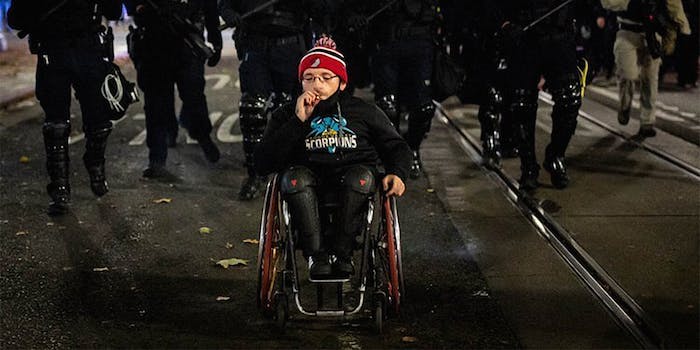 ‘I think about leaving every day’: Disabled activist says he’s been assaulted, threatened, doxed since Andy Ngo targeted him online

What happens when Andy Ngo @'s you.

Dustin Brandon Ferreira is the first to admit that he has “a mouth.” Brandon is a Portland, Oregon activist who’s been involved in civil rights protests since the summer of 2020.

Brandon’s activism brought him to the attention of right-wing provocateur Andy Ngo, editor-at-large at the Post Millennial. Brandon says his nightmare began shortly after Ngo tweeted footage of his arrest on Sept. 1, 2020. (He wasn’t charged.) In the tweet, Ngo referred to Brandon as a “belligerent wheelchair-bound rioter.” Brandon told the Daily Dot that since then he’s been shot at, head-butted, punched, sprayed with mace, doxed, threatened, and had a loaded gun pulled on him—all due to his activism and Andy Ngo posting about it.

“Andy likes to target individuals,” Brandon told the Daily Dot in a recent telephone interview. “He knows that putting up mugshots of white people in a Black movement will [trigger] his right-wing crowd,” he added.

Brandon is more recognizable than most members of Portland’s large, diverse activist movement. He’s tattooed, foul-mouthed, and makes no attempt to cover his face or hide his identity during protests. He’s also confined to a wheelchair. Brandon was born with a severe type of osteogenesis imperfecta, commonly known as brittle bone disease. Over the course of his 38 years, he says he’s broken bones more than 500 times.

Footage from protests gives the impression of a fearless activist. But the reality is that Brandon is more vulnerable than most due to his condition, which also stunted his growth. Records Ngo posted from one of his arrests show that Brandon is 4’2″ and 120 pounds.

Brandon’s diminutive size and bone disease hasn’t stopped Ngo’s far-right followers from threatening him online and, he says, assaulting and targeting him in person. The Daily Dot reviewed footage he provided in which people he says are from the far-right chase him and some others down a street, taunting him and laughing. He says at least one of these individuals was armed.

A few weeks after Ngo tweeted video from Brandon’s arrest, Brandon was arrested again. This time he was initially charged, though they were dropped within days, records show. Ngo swiftly posted Brandon’s mugshot on Twitter. He’s continued using his mugshot in subsequent tweets, long after the charges were dropped.

Things escalated after that, Brandon says.

Within 48 hours, his name was flying across far-right circles online. “They’re making videos with my address,” Brandon said.

The threats continued. For eight solid hours one day, people ordered food delivered to his family members across the country, he said, each time giving the restaurant his phone number so he’d get a call to confirm the order. He says this is a tactic the far-right uses to terrorize their targets. The message is simple: We know where your family lives.

Their harassment didn’t stop with the food delivery prank. “They then reached out to every former employer I ever had, sent them death threats, told them they were employing an active antifa member,” Brandon said.

He also says someone threatened to blow up his apartment building.

As far-right figures terrorized Brandon, Ngo continued tweeting about him. Over the period of a year, Ngo called him “an antifa militant,” a “wheelchair rioter,” “antifa activist,” and the like. Ngo accompanied his tweets with either a photo or video of Brandon. Brandon, for his part, has had no qualms going after Ngo. In one video Ngo posted, Brandon says of Ngo, “It is my personal mission to fucking destroy your career.”

Brandon also told the Daily Dot that last August, “one of Andy’s right wing groupies … took a shot at me.”

A shooting in August that Brandon was present for was reported on by the Intercept.

In another post that Brandon confirmed making, he wrote, “I’ll either be celebrating your inevitable days full of lawsuits and judges one day soon Andy Ngo; or I’ll be lighting up a big ol’ blunt to the sound of hearing karma finally found your life.”

Ngo characterized Brandon’s statement as “waiting for the day he can celebrate when I am dead.”

Via Instagram DMs, Brandon told the Daily Dot that the karma he was referring to comes in many forms, such as losing sponsorships and fans. “I could care less if he runs into a group of people that he targeted and they decide to give him a milkshake shower,” he wrote, referencing an incident that catapulted Ngo to right-wing stardom.

“Whatever karma naturally comes his way is of his own making.”

Ngo’s allegations against him are nonsense, says Brandon. He insists that he’s nonviolent.

“I am just a community member who cares about my fuckin’ community. Am I anti-fascist? Absolutely.”

“I am not antifa,” he said, drawing a distinction between the caricatured version Ngo posts relentlessly about, and his own activism.

Many people mocked Ngo and the police for targeting a handicapped person, but Ngo’s tweets were also frequently met with calls for violence against Brandon. Many of the threats reference his disability.

“Give him a good ass whipping,” one replied to his tweet of Brandon’s mugshot in September 2020.

“I’d knock that fucker right outta his wheelchair and drag it a mile down the road n tell him ‘go get it,’” reads a reply to one of Ngo’s tweets in May.

Undeterred, Brandon continued protesting. When Ngo’s book went on sale, he organized a protest of a Portland bookstore that was carrying it.

The bookstore protest of last January, which Brandon continued for several days, appears to have gotten under Ngo’s skin. In typical form, Ngo parlayed the moment into an opportunity to promote himself and play the victim.

Ngo’s followers responded in kind, Brandon says. He claims that they reported his Twitter account en masse, ultimately resulting in his permanent suspension. Brandon says that he was suspended for tweeting a video of himself signing a copy of Ngo’s book inside a store. Ngo, he says, retweeted it.

“Andy said I was targeting him and said people should go report my post.”

Ngo has something of a reputation for being an online tattletale. He’s also routinely accused of misconstruing the facts to malign people he believes are antifa, a category he applies broadly to leftists and activists.

Brandon says that he called off the bookstore protest after people aligned with Ngo, including Proud Boys, started showing up and trying to cause trouble. “Andy had been posting about it continuously,” he said.

Brandon getting suspended from Twitter and calling off the bookstore protest didn’t stop Ngo from continuing to tweet about him, most recently in August. And Ngo’s sympathizers didn’t stop threatening him.

A YouTube video uploaded by an anonymous user in January shows Brandon being detained by authorities. Comments on it include, “I would have rolled that little freak into traffic,” “Did they tip MiniTifa out of his wheelchair? Lol,” and “Let him ride the lightning for funnn.”

He says that the threats and terrorization in part inspired by Ngo extended to the police force itself.

“Cops on police line, in riot cars, would regurgitate things that happened on Twitter,” Brandon said. He said that shortly after his account was banned, officers would taunt him about it.

“Police are so incredibly active on social media,” he said.

Brandon said that he was headed home from a quick trip to the store when two officers accosted him in June. One got in his face, he says, yelling about antifa, the same insult Ngo had been hurling at him online for the better part of a year. Then he says she kicked him in the shin, causing a serious fracture.

“I’m actually getting over an extensive surgery,” Brandon said. He says he’s consulted with counsel and is considering filing suit against the police over this and other incidents, such as his arrests, which he characterizes as unnecessarily violent. Ross Caldwell of the Portland’s Independent Police Review told the Daily Dot via email that it has opened investigations based on Brandon’s allegations, but “can’t comment on the specifics of our investigations or the officers involved.”

He said that police tore his rotator cuff and dislocated his shoulder during one arrest, and reinjured it during another. Court records show that Brandon was only charged after one arrest, but it was quickly dropped.

The threats and abuse have taken a toll on the brash activist.

“I think about leaving every day. […] It’s hard to leave your house every day and feel you’re being watched,” he said.

“Just because of what Andy’s done over the last year … when you see him go after the most vulnerable people.”