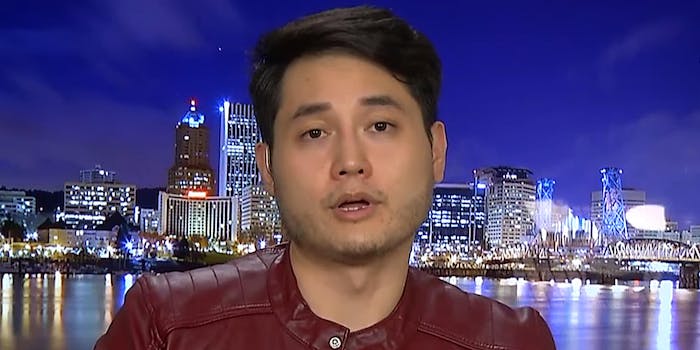 A prominent antifa activist from Portland, Oregon, died on Saturday after a hit-and-run outside a local bar. In a tweet, Portland’s Rose City Antifa said that 23-year-old Sean Kealiher’s death was unrelated to his activism.

Our hearts go out to the friends and family members affected by the death of Sean Kealiher. Our sources indicate that this was not related to fascist activity.

If you are struggling with this news, we would encourage contacting Lines for Life at 800-273-8255.

But self-proclaimed journalist Andy Ngo, who became a national figure after he was attacked by antifa-affiliated protesters with a milkshake during a protest, wants Kealiher to be remembered for being mean to him.

Ngo has long maintained he is an independent reporter who covers the far-left despite his ties to the far-right. He’s also had a loose relationship with the truth while reporting on antifa.

Over the weekend, Ngo followed up news of Kealiher’s death with tweets blasting the activist and sharing clips of confrontations. “I knew him for threatening journalists,” Ngo wrote.

The Portland antifa militant killed in unclear circumstances gained a reputation for threatening journalists. Still, @tedwheeler & others have ignored this. He threatened violence against myself & a former colleague when we were in student media. https://t.co/3P6KYa1t9n

When I was on my 1st assignment for student paper at Portland State in spring 2016, I recorded Sean Kealiher (who was not a student) arrive w/a group of outsiders to shut down a pro-Trump student group meeting. Kealiher jumped on table to try & fight a student who was filming: pic.twitter.com/BKA4HvQkQT

When Portland Mayor Ted Wheeler tweeted out his condolences, Ngo asked, “How come?”

Many citizens in Portland have been killed or victimized in other brutal ways but never received personal condolences from you. How come? Kealiher was a militant and violent far-left activist.

People on Twitter criticized Ngo for using someone’s death to remind everyone how much he disliked the person.

Andy Ngo on Wednesday vs Andy Ngo on Saturday. pic.twitter.com/cO2AqtGyFM

Andy Ngo has taken it upon himself to publicly drag the person, my friend, who was murdered in a hit and run last night. He has threads with people celebrating Sean’s murder. The suggestion seems to be that he had it coming. Ngo is a monster.

Andy Ngo makes a crybaby gofundme that makes hundreds of thousands of dollars when he is “attacked” by antifa w/ no medical receipts & makes enough that he quit his job at shillette, but insinuates that a dead protestor deserved to die for being too mean to right-wing journalists

Ngo was previously spotted laughing with Patriot Prayer, a far-right group, as they plotted an attack on antifa activists.