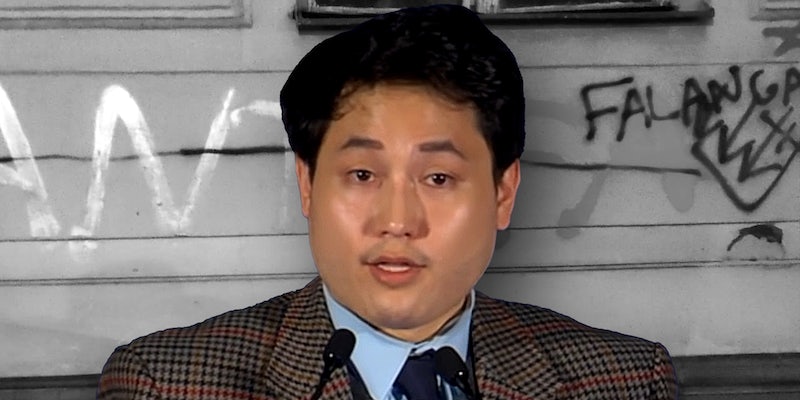 Ngô spent the weekend filing copyright claims against people who posted it.

Andy Ngô is reportedly on a mission to stop people from reposting a picture of him posing in front of the name of a far-right group. Ngô, editor-at-large with the right-wing the Post Millennial, describes himself as a journalist. His critics say he intentionally spreads disinformation that benefits the far-right, which he’s closely aligned with.

According to multiple sources, Ngô spent the last several days filing Digital Millennium Copyright Act (DMCA) takedown requests against Twitter users who reposted the picture of him with the far-right group’s name.

Twitter has complied by removing the image and punishing at least two accounts that posted it.

Those affected believe that Ngô is abusing the DMCA takedown request process and that Twitter is complicit. They argue that their posts of the image constitutes permissible “fair use” under the law and Twitter policy.

Ngô tweeted the picture on Oct. 10. He retweeted it over the weekend. In the photo, Ngô sits in front of what he described as “antifa graffiti and their ‘Iron Front’ logo.”

The image, taken in Poland, does show “antifa” spray-painted on the wall behind Ngo. The word “Falanga” is also on the wall.

Falanga refers to a group associated with the fascist National Radical Camp (ONR).

Citizen journalist Chad Loder subsequently reposted the image and commented that Ngô had posed “in front of ‘anti-antifa’ graffiti from the far-right group Falanga, known for their violent [antisemitic] attacks and their pro-Kremlin stance.”

As reported by Steven Monacelli, Loder was suspended after Ngô filed a DMCA claim against them. Loder has recently helped convince numerous advertisers to abandon the Post Millennial.

Via email, Loder told the Daily Dot that the Electronic Frontier Foundation (EFF) has filed a counter-claim on their behalf. Loder said that their tweet of the image was “very clear fair use under the copyright act.”

Many protested Loder’s suspension by posting the image of Ngô.

Monacelli and activist Emily Gorcenski were among them.

“This is a fair use reproduction for the purposes of public interest reporting,” Gorcenski tweeted along with the contested image.

Gorcenski then tweeted, “I will be filing a counter-claim for this obvious frivolous abuse of the system.”

In a direct message to the Daily Dot, Gorcenski said that “Ngô has found a way to weaponize the DMCA to silence political opponents” and “people who disagree with him.”

“It is noteworthy that Twitter takes such a heavy-handed approach against people who legitimately contribute to public interest journalism, while giving Ngô, who himself has had many DMCA claims filed against his account, unlimited leeway to continue to propagate defamatory lies that, in my opinion, endanger innocent people.”

Monacelli added that Ngô also filed a DMCA claim against one of Monacelli’s images, which he said “definitely doesn’t belong to [ Ngô] (it belongs to me).”

If Ngô did file a fraudulent DMCA, Monacelli noted, then under Twitter’s “terms of service that would be ground for a permaban.”

Twitter’s policies warn that filing fraudulent DMCA requests can also be grounds for a lawsuit.

An EFF spokesperson confirmed that it filed a counternotice on Loder’s behalf. “The purpose of the DMCA is to take platforms like Twitter out of the role of copyright judge,” they told the Daily Dot via email. “But Twitter should not suspend accounts based on DMCA notices without giving users a chance to submit a counternotice.”

Loder and Gorcenski believe that Twitter is allowing Ngô to abuse its system. They say Ngô flouts the rules and Twitter turns a blind eye because he has such a large and engaged following.

“Twitter needs to answer for their preferential treatment of Andy Ngô in the face of his numerous blatant violations of Twitter’s Terms of Service, including dozens of sustained DMCA violations by Ngô, his repeated posting of disinformation, and his posting of private personal information,” Loder said.

Update 2:38pm: Following publication, Twitter lifted Loder’s suspension. “I just received an automated email from Twitter saying that they reviewed my suspension under the repeat copyright infringer policy and that they reversed it,” Loder told the Daily Dot via email.