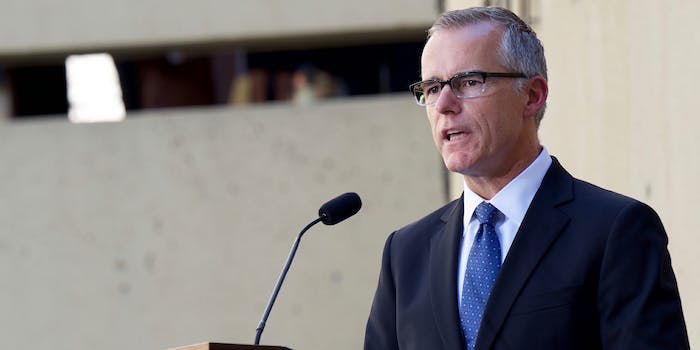 Report: Andrew McCabe could be fired days before his retirement

McCabe, a frequent target of Donald Trump, is scheduled to retire on Sunday.

Attorney General Jeff Sessions is looking into a recommendation to fire former FBI Deputy Director Andrew McCabe just days before he is scheduled to retire, according to a new report.

The FBI’s Inspector General found that McCabe, a frequent target of President Donald Trump, was not forthcoming in a review that included probing his part in the investigation into Hillary Clinton, the New York Times reports.

The report suggested that McCabe could be fired, and Sessions will ultimately decide whether to do so. Sources told the newspaper they expect him to be fired before Friday.

McCabe was planning on retiring on Sunday, according to the report. He was made the acting director of the FBI following Trump’s controversial decision to fire former FBI Director James Comey last year. He stayed in the position until Christopher Wray was appointed by Trump in August.

Trump reportedly asked McCabe who he voted for after he took Comey’s position. It was also reported that Sessions told Wray to get a “fresh start” at the FBI by firing the former deputy director and other high-ranking members of the agency.

As the Times points out, McCabe has been at the center of the probe into Russian interference in the 2016 election and could be a witness in the investigation by Special Counsel Robert Mueller into whether Trump obstructed justice.

You can read all of the New York Times‘ report here.