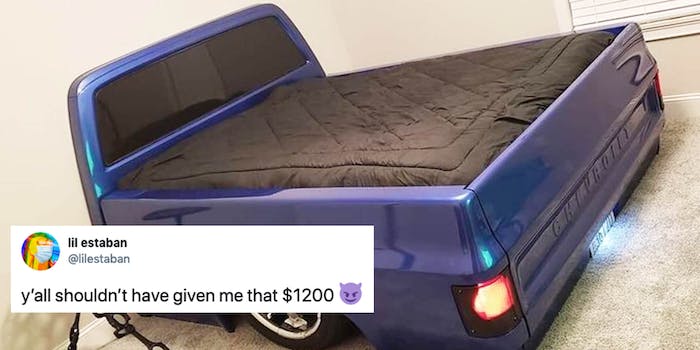 ‘Y’all shouldn’t have given me that $1,200’ is the first good stimulus check meme

Can the government spend it better, though?

Somewhere in the vicinity of 80 million people have now received their emergency stimulus checks, which were issued by the government in response to the coronavirus pandemic.

(Haven’t gotten yours yet? Be patient, tens of millions of payments are still on the way, and those receiving paper checks may have to wait even longer!)

For many Americans—particularly nonessential workers who have been furloughed or laid off completely—these stimulus checks are going towards basic costs of living such as groceries or rent. Others may be saving their stimulus check funds in the event things turn even further south with the economy. And of course, there is also a contingency of folks who are spending that shit like it’s Brewster’s Millions (err, Brewster’s Thousands?) up in this quarantine.

Which brings us to the current meme taking over Twitter, which involves people tweeting the absurd things they theoretically spent their $1,200 on. These can consist of anything from, say, a bed shaped like the trunk of a 1973 Chevrolet truck to a refrigerator door styled to look like Han Solo frozen in a block of carbonite. Or, in another case, a pair of purple crocodile-skin cowboy boot rollerskates!

And then there’s this contribution, which very much conjures the time Ben tagged along on Treat Yo’ Self day on Parks and Recreation:

There were naturally a lot of memes involving spending stimulus checks on fake designer items such as hot dogs and pets.

And some people are joking about spending their stimulus checks on extremely silly vehicles:

Others riffed about spending their stimulus checks on questionable internet purchases—which a good many of us are probably actually guilty of!

With summer just around the corner and it still being up in the air whether people will be able to go to the beach, we wouldn’t blame anyone for spending their stimulus check on this:

Not to take the piss out of a fun meme or anything, but for anyone at a loss on what to spend their stimulus checks on—there of plenty of great organizations and charities out there you can donate it to.