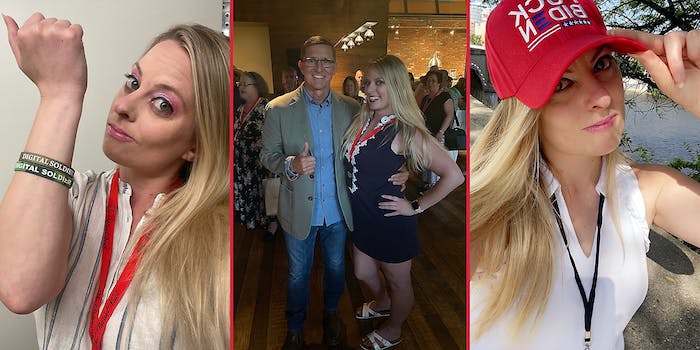 'I have been undercover as a MAGA since the 2020 November Stop the Steal Rally in Washington, DC.'

A woman repeatedly pictured at far-right rallies over the past year says she was working undercover as part of a personal research project into extremism.

In a tweet on Saturday, the woman, who identified herself as Amanda Moore, revealed that she had been cultivating relationships with prominent far-right figures since November of last year.

“Hey everyone. My name is Amanda, and I have been undercover as a MAGA since the 2020 November Stop the Steal Rally in Washington, DC,” she wrote.

Moore noted that she had ultimately decided to come forward after her identity was uncovered by a QAnon promoter who shared her name with other far-right individuals.

“I thought it was ok to continue going to straight up nazi events, but have recently learned my ‘friends’ in that world have also found out,” she said.

During her year posing as a supporter of former President Donald Trump, Moore says she was able to record her interactions with some of the far-right’s biggest names.

A slew of photographs shared by Moore show her with everyone from Rep. Marjorie Taylor Greene (R-Ga.) to MyPillow CEO and election fraud conspiracy theorist Mike Lindell.

Moore further noted that just a handful of researchers and journalists were aware of her undercover work.

“Some of the best researchers and journalists in the field have known what I was doing from day 1,” she added. “I’ve outed myself to local antifascist groups and protesters in nearly every city I’ve been to, asking for their help on who I should keep an eye out for.”

Amanda’s revelation, unsurprisingly, was met with mixed reviews. Although her work was largely applauded by the left and condemned by the right, some left-wing activists accused her of going too far.

“Imagine if @the_cancel_mob had gone ‘undercover’ as a cop, participated in violence against POC and then called it a social experiment to help further the cause of justice…” @RWPalerWatch tweeted. “[W]ould you all STILL support her? Does no one realize that you can expose racism WITHOUT being a racist?”

Others on Twitter argued that “that going undercover and putting to a record what fascists are saying in private is actually a critical component of antifascist organizing.”

Speaking with the Daily Dot, Moore responded to the criticism by encouraging left-wing activists “to go fight fascism in whatever manner they see fit.”

With her identity now revealed, Moore says she plans to begin revealing with journalists what she uncovered during her year embedded among the far-right.